I’ve got a weird problem. I have a VPN server running on a Linux machine at my office. I’m trying to set up the VPN client on my GL-MT300N-V2 so that I can access devices on the LAN behind my GL-MT300N from the vpn server’s network. So that sounds like a route problem, but it isn’t. I can ping both the router and devices behind it from the office network. What doesn’t work are websites. I tried going to the config screen at 192.168.8.1 and that doesn’t load. I also plugged a VOIP phone with an internal webserver into the router and I can’t access the website on port 80 from the server network, but ping does work. I can also SSH into devices, just not port 80 or 443.
I’ve attached my firewall rules. Let me know if there’s something else I should show. 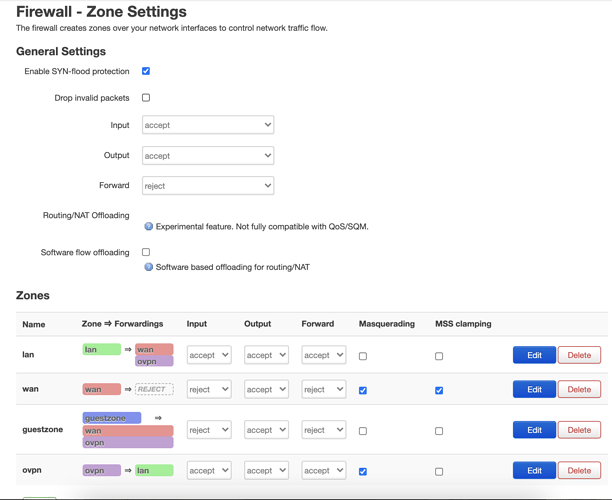 Yes I did try that and that didn’t work. However I did mess around with it more over the weekend and I was able to access the router admin page, but never something behind the router. How could I resolve that?

Have you set static routing rules on the VPN server machine? can you show it?

It’s going to be hard to show that, BUT, I can ping the devices behind the GL.inet router, I just can’t connect to their internal web server. So I’m thinking it’s something to do with the route back from the remote client through the GL.Inet

You can try to stop the router’s web server.
/etc/init.d/lighttpd stop

how would that help? I’m trying to access multiple devices on the remote lan. I can ping them but not access their other ports