I’ll start by saying I am a complete novice when it comes to this sort of thing so my apologies if I’m not making sense!

We own a farm and would like to setup two Helium Miners to create coverage for IoT devices, I recently bought a new Hotspot and have set this up in our out building about 400 to 500 meters away, we only have one internet connection to our property and cables have already been run to our outbuilding (has been for years) and our devices plug into a switch in that building.

I assumed it would be a plug and play situation but the outbuilding gets the internet from our switch in the main house and this causes an issue as both hotspots are on the same connection and are both using port 44158 and causing the hotspots to become ‘relayed’ after a little research (limited I might add) and speaking to other I was advised to get a GL-MT1300.

I have made a diagram of the setup and for ease of use (assuming it’s a plug and play situation) I have left the outbuilding switch out of it as I assume the hotspot can be plugged in after. 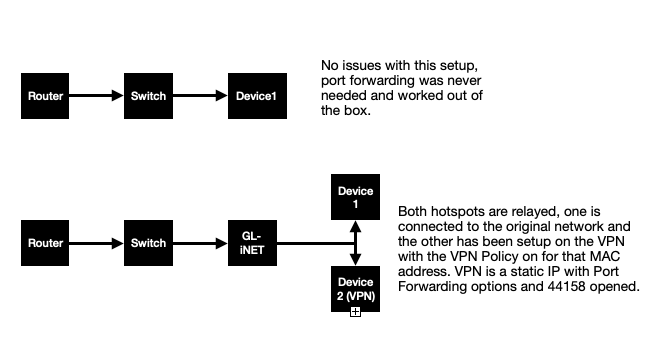 Any help would be great, am I even able to have both devices with the ports opened? I assumed with the VPN and VPN policy active having port forwarding to both devices would be possible?

I think you should do this:

For device1 you should use a before.

Thanks for the response, yeah that’s the feeling I’m getting too it was just nice to have then all in once place and I could easily check on data being pulled without having to log into multiple things.

Thanks for your time!

I could easily check on data being pulled without having to log into multiple things.

Yes I understand. But I assume you cannot ask two Helium device to use one public IP. I am not sure though.

What’s what the VPN was for

It is interesting that you ask. In your first post you have vpn.

The vpn is connecting you to another vpn server, so that you have the VPN IP address as a 2nd public IP.