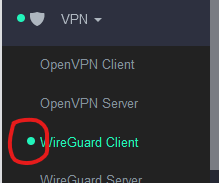 it unclear to me why its failed maybe main ISP was not quite working at time of GLINET router being brought online but some method of retry after say 5 mins would be really handy rather than having to manually fix everytime this occurs.

i have mixed router types inclduing Ar750s and MT300N V2s and a mix of firmware but majority of issues are with the MT300N V2’s and i have most of my estate running 3.203 firmware

Fixed a problem related to wireguard when device reboot or ISP network unstable.

i will give it a try however seem to have lost the ability to upgrade to testing firmware from goodcloud but will upgrade a few locally and wait for the official release and hope it sorts the issue.

@alzhao i would be very careful in advising anyone to try this on a Mango MT300N-V2 thats 2 routers i have tried locally to upgrade from 3.203 using snapshot as advised and its broken both. Looked as though it was installing fine verified the install but upon reboot it fails to come back online instead just continues with a single flashing light repeating for power.

going to try the unbrick method to reset