Just for reference, here in Australia, the following two MiFi units can often be purchased for about $25AUD (with at least 4GB of data) on special at the supermarket. They’re both locked to Telco but can both be unlocked via code from Ebay for a couple of $$s.

Because they’re both hostless modems they just plug in via USB and show up as tethered. A little bit of “overkill” as they are actually full routers within themselves (though limited in their functionality) but the good thing is that because they have their own internal battery you don’t have to worry about overloading the USB port. On one of my old TP-Link routers, if I try and run the Alcatel without a battery it just keeps rebooting as the USB port doesn’t supply enough juice.

If they work with the Mango hopefully they should work with other GL.iNet units as well

I know at least the Alcatel unit is available on T-Mobile in the US but unsure if other country telco’s support these units as well, but I’m sure they’re out there.

Hopefully of use to someone somewhere out there

Thanks for sharing it in here.

$25 AUD for device with data is so good prices. So Telco profit from you buying more data?

@alzhao .Yes they include a prepaid broadband SIM. You will get between maybe 4GB to 12GB (depending on what deals the telco has running) to use in 30 days.
They lock the device to the Telco hoping that you will keep renewing every 30 days at relatively high per GB cost after initial purchase ($30 for 10GB, $60 for 30GB)
I would assume that a lot of people (less knowledgeable?

) do just that for convenience. It’s the old Gillette Razor marketing strategy. Others of us unlock them and then use prepaid voice/data sims when on special from any telco just for data so end up with 30-40GB for between 99 cents and $10 for 30 days. People just then toss the sim and move on to the next cheap deal.
I was talking to Marin the other day about the suitably of the Gl-mifi and Spitz for this purpose in the Australian market as most of these cheap devices are only Cat 4 devices and the Ep06-e modem supports Cat 6 and covers all the major Australian telco bands. Many people are going to mobile broadband down here because a lot of the landline services are rubbish and higher data rates can be achieved on mobile broadband and prices are slowly becoming reasonable.

Thanks for this information. Yes please share me info about your ideas and testing result.

I can now confirm that both these units also work with the AR750S (Slate). 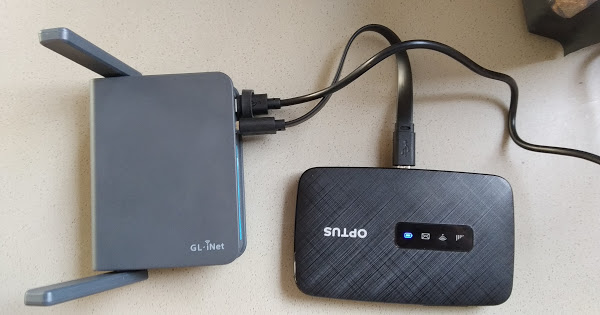 been playing around with the MF910Y
Doesnt seem to like USB tethering with the GL-MT300N-V2.
If i use wireless relay bandwidth goes to hell.
Anyone had more success?