I have a AR750 Slate. Love it… it does what I need and more 85% of the time… I have set it up using the 2.4G to connect to any public network and using the 5G as an “internal” network. I have no issues connecting to maintaining the 5G network but the 2.4 drops its connection semi-regularly. it does re-connect most of the time… but not so good for realtime activities… voip etc…

im on the latest firmware and also using the supplied power brick just to be sure??

While if you are on public network, then connection may break. Mainly because public network has many ESSIDs and signal may vary. If you can repeat using 5G it will me more reliable.

If you repeat your private network, connection should be much solid.

ok… I did say public network to illustrate… this happens within my friends house too… the purpose is too maximise throughput between clients and then to the internet… hence why I am wanting to connect the 2.4 to the internet and the 5g internal…

The truth is, you should repeat 5G wifi and use 5G as internal as well. 2.4G performance is so so when using repeater.

catch is most networks (public) are only 2.4… and even most home networks are 2.4 if they are using supplied routers… also its not in repeater it is in router mode…

and even most home networks are 2.4 if they are using supplied routers…

really? Europe?
I think in the US the market is saturated with cheap AC wifi devices now.

Yeah in the EU a lot of ISP’s give their users routers to use for free, included with their subscription. Sometimes it’s mandatory to use their device, as it has some VLAN id magic to get triple play to work (internet, tv, ip phone). Those usually have wifi set to 2.4ghz and channels 1, 6 or 11. Inexperienced users (or cheap ones) will keep that router and use it for wifi too. The airwaves become very congested on 2.4ghz then, if a an entire building has the same setup, with 50+ devices with everyone on Netflix etc.

Here in Sweden we have already decoded the VLAN id’s for most ISP’s, so any higher quality switch such as a Netgear lets you set up the correct VLAN id’s for each port to get triple play to work, and then use any router you want downstream for wifi, ie a GL router, wink wink

Inexperienced users (or cheap ones) will keep that [2.4 GHz-only] router and use it for wifi too.

The US market is so oversaturated with 2.4 GHz devices that many corporate installs now don’t even bother with 2.4 GHz, disabling it completely.

Standing on a street corner in downtown Nha Trang, Vietnam 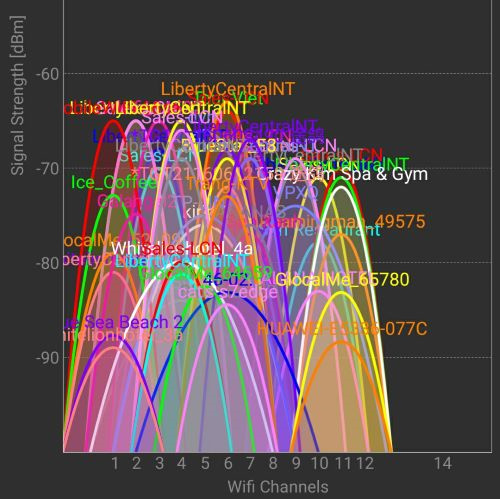 How does the 5ghz band look?

That photo was maybe a year and a half ago. There wasn’t much 5Ghz around at all, in fact I did scan the 5Ghz at the same time, with NO 5Ghz connections available. Most people just use the modem supplied by the internet company unlike say Australia (and probably other countries) where people buy their own modems to “supplement” the ISP service to get better WiFi speeds or more stable performance or 5Ghz band… Commonly found was ISP supplied units like the ZTE F606. No 5Ghz band at all.

The consumer shops tended to have small, cheap routers from say TP-Link or Tenda and it was very rare to find one that support 5Ghz, and the price for these was much higher than a cheap 2.4Ghz only units (N300 or N150)

Internet there was pretty good…when it worked. The speeds were pretty up and down. I read reports how the “sharks bit the main feed cable” maybe 4 times in the year and a half I lived there as the reason why internet was so slow.

I have this router and have the same problem. Constant disconnect / reconnect while repeating a private connection.
They keep asking the same question like its something I’m doing wrong… No, it has nothing to do with the power supply! It is clearly an issue with your router, when so many people have the same problem!
Stop trying to tell me that I am plugging it in wrong!

First of all, the repeater disconnection problem happens in early version of the firmware and after upgrade, most of the problem goes away. And this has been confirmed by users.

Second, if I am not wrong, you emailed to us in beginning of July about the problem you met. You told us that you fixed this problem by yourself and “It was lack of power flow from the cheap USB hub.”

If you have new cases and talked with our guys somewhere, after the last issue, please let me know.

OK. I found your another post and I will look into it.