I have a situation where I’m repeating the signal from a cell Mifi device. The device itself is showing a strong 5 bars of LTE (-63dBM), and running speedtest while connected directly to the device’s wifi network gives pings of ~50ms and sustained d/l speeds around 20Mbs.

When I tell the AR150 to repeat this wifi network, and then connect to the AR150’s wifi, the connection is basically unusable. Timeouts and DNS lookup failures.

Note that this is not always the case. Yesterday with the same setup I was getting full speed through the AR150.

I’ve tried restarting all equipment. Everything connects OK but is just very slow through the repeater.

All of the equipment is sitting together on the same work bench.

Any ideas? Are there settings I need to tweak?

Wireless performance may related to channel, chip etc. So when you use repeater, a 2nd wifi device is added and performance is not as stable as just one. When AR150 works as repeater, it need to talk both side, which will cut the speed half.

So, what you can try is to change channel on your main wifi then set up the repeater again. Also check AR150 is the speed is at 72Mbps. Please change to 150Mbps.

I understand that I can expect some loss in performance (upward of half the “raw” speed), but what’s happening is that with the device directly I’m getting ~20Mbps, but through the repeater I’m barely able to connect to a website. speedtest.net, for instance, times out before I even get the “GO” button displayed. Firefox can’t even resolve DNS queries. And like I said, it seems to be sporadic. Right now it’s working fine but this morning it was unusable and I had to connect directly to the Mifi device (instantly getting back a ~20Mbps connection).

When the problems happen, can you please check the UI of AR150 is the repeater is still connected.

If it is not then the problem is that AR150 disconnects from your main router. If the status is not stable it will do this.

To keep it always connect regardless if wifi is stable, rename the file /usr/bin/gl_health to semething else then reconnect your repeater and restart the router.

I did check the AR150 this morning when I couldn’t connect to the wider internet and it did indeed say it was connected to the cell device. The cell device itself at that time also reported a -60dBm signal (5 bars LTE).

I really don’t think it could be related to the cell device wifi, since at the time of the outage on my laptop I also had two other laptops hooked up - the second was connected to the repeater (like the first), but was showing ~15Mbs through speedtest (my laptop could not connect to speedtest). The third was connected to the cell device directly and was showing ~20Mbps through speedtest. ie one device out of three was unable to get a usable connection to the WAN side of a 20Mbps connection.

Just as an update, I also just noticed the same problem with a device connected via an ethernet cable to the LAN side of the AR-150, while it was the only device actively attempting to use any network bandwidth, so I think this is not related to wireless connections only.

Can you pls show a screenshot of the internet status page?

Here you go. I was experimenting with tethering a Mifi device via USB, and it appears to have the same problem. I took this screen shot while connected to the AR-150’s wifi, but I was unable to get useful access to anything on the wider internet at this time. speedtest.net reported “Latency Test Error” and couldn’t perform a test.

I had to disconnect from the AR-150 wifi and connect directly to the (same) Mifi device in order to post the image here. I did a speedtest right before that and was getting 10Mbps down, 5Mbps up.

The apparent flakiness of the Ar-150 is really annoying right now. Unless there’s some way to make it more reliable I’m going to have to consider other routers. 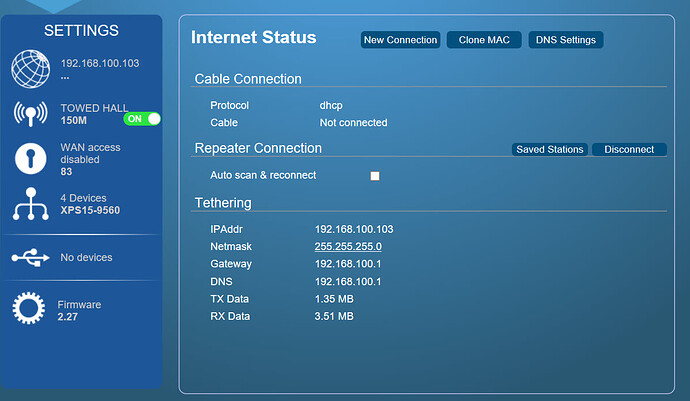 I cannot see any specific problems on the settings.

You can do this, reset the router and clean all the settings and try again.

Exchange to another router, e.g. AR300M and try again.

Sure, a complete reset and reconfigure will fix it, for a while. I’m not going to go through that every few days.
Do the other models run the same software?

At least the WiFi chip and driver is different, which I think is the problem