I have a new AR300M, using it in Repeater / Wisp mode. I am using the latest firmware, but sometimes, the AR300M’s SSID will disappear, but if I connect to a strong wifi signal nearby, it works just fine.

I ordered a Yagi TP513 2.4ghz antenna and matching cable for the router, but when I hook it up, and point it at an open wifi such as Starbucks google or any other, it doesn’t improve the signal much and the repeater will lose it’s connection.

Thanks in advance for any help!

We tried to bridge our lan using two without much reliability. Bought an Asus RT-N12 D1, hasn’t had a hiccup since. Yeah its bigger but its solid like a rock.

Cool, thanks for the advice!

A Yagi antenna is designed for point to point communications. What you need for pulling in distant WiFi signals in Wisp mode is a parabolic reflector.
Also Wisp is a repeater mode, so when there is nothing to repeat (ie the signal you are trying to repeat is too weak or blocked by a truck etc) the repeater’s radio will mute automatically.
This is why it works well with a strong signal.
Also, WiFi is microwave and attenuation in a coax cable to an antenna is often more than the gain the antenna can give.
So in short, both the AR300M and the Yagi antenna are a bad choice for your attempts at exploiting Starbuck’s free WiFi

Hmm, lots of conflicting advice out there. You sound like you know what you’re talking about, just that that’s not what Yagi says about their antenna and matching cable, which is only a few meters long. I’ve tested and retested it on a pole with the gl-inet on external battery power and my iphone logged into it, so I can walk around on a large roof and see where the best reception is. I found it and I’m consistently getting fast speed on an open point, I’m streaming 3 hi def videos on separate devices.

@bhart
Lmao, I am glad you have sorted through the conflicting advice and managed to overcome the problems you originally posted and now find the AR300M is working so well for you.

I ordered a Yagi TP513 2.4ghz antenna and matching cable for the router, but when I hook it up, and point it at an open wifi such as Starbucks google or any other, it doesn’t improve the signal much and the repeater will lose it’s connection.

If your device does not have external antenna, don’t use the connector on the board, as that’s for factory calibration.

The AR300M is a single radio device but does have dual diversity antennas. Swapping just one of the standard 2dbi externals for a high gain is just fine.

@sfx2000 We are both correct in a way. The QCA9531 SoC supports MIMO 2x2. It has a single radio front end that can transmit and receive simultaneously using two antennas. This is great where lots of reflections off walls, buildings etc creates multiple signal paths that can be utilised.
In the case of using a highly directional antenna (eg Yagi) for picking up the signal from a remote location, the environmental multipaths are greatly attenuated.
Using a single Yagi will work very well, the SoC running in diversity mode.

If the remote AP is also MIMO 2x2, then a second Yagi might well give an increase of throughput but the natural variations in multipath signal propagation mean the highly directional Yagi could defeat the MIMO 2x2 operation in many instances. Overall it could give a throughput improvement, but it all depends on the local conditions as well as the setup of the remote AP.

It has a single radio front end that can transmit and receive simultaneously using two antennas.

from the data sheet… 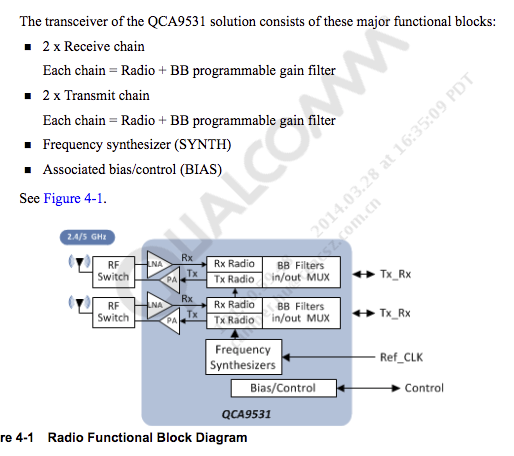 Having the unbalanced front end, probably won’t hurt the chip, but it would hurt performance - even then, the baseband might extract enough info from the combiner… and as a practical measure, I have seen LTE chips in a 1R2T config, not very common though…

On the Tx side, performance with a high gain on one path, and a low gain on the other - depending on range and sensitivity of the AP station, information there might be lost - depends on how the interleaver does it’s job… 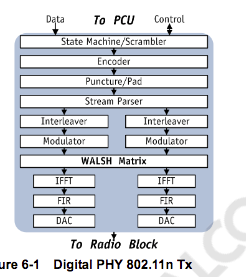 Ideal would be to have two antennas…

Hehe, never thought this would end up getting into a discussion about the baseband and Tx/Rx flows through a WiFi chip…

Indeed - even the old school B/G devices (like the WRT54G) used Rx diversity to improve coverage from client stations - they really were 1Tx/2Rx devices.

When we look at the QCA9531 in the AR300M - it’s 2*2:2 MIMO - but the Analog front end also does fast diversity on the Rx side, it’s going to do it’s very best to get the bits - so we get into the realm of RFFE and how things can work there going into the baseband.

In any event - the AR300M is essentially a travel type router/Ap, and a very good one…

In applications like OP posted - looking at a solution where we have external PA/LNA and better antennas (let’s say 3 dB gain) is going to better meet his use case.

2*2 high gain patch antennas are available, and less cumbersome that a yagi…