I’m posting here looking for a possible solution for the setup I would like to have with my AR750.

My current setup: to the modem provided from my ISP, I’ve attached a FritzBox 7530 which serve as the main router. To the FritzBox I’ve then attached via LAN-to-WAN the AR750 router. The AR750 is then attached via LAN to my TV. The reason is that by setting up a VPN in the AR750 I can then access location-based app in my Smart-TV, which would otherwise not be visible with my normal internet connection.

The problem: I would like to browse the AR750 setup page, by remaining connected to the FritzBox network. And without instead connecting directly to the AR750 network.

I’ve managed to create a similar solution by setting up the AR750 in the same network range as the FritzBox (by following this video) but after activating the VPN, I noticed that the TV was not having obtaining any VPN-IP. Like if the TV internet traffic wasn’t passing through the AR750 anymore.

Someone with a good input on how to solve this issue?

Many thanks to everyone in advance! 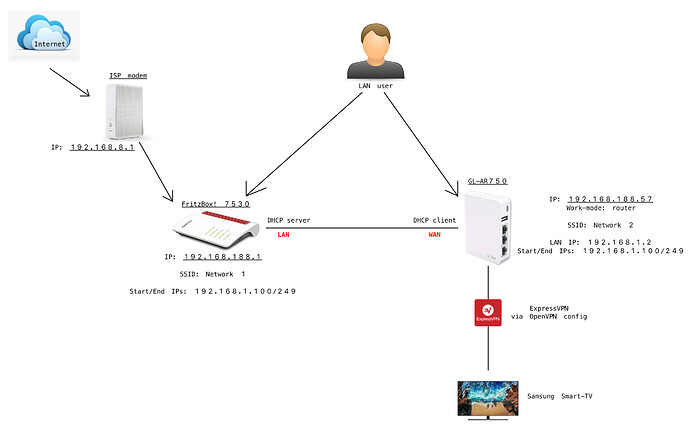 so you want a vpn out for your smart tv devices and a vpn in to manage your ar750.

The problem: I would like to browse the AR750 setup page

first of all thanks for your reply.
I’ve been working a bit on your notes and have to say that I’e implemented the port-forwarding as you suggested. Unfortunately I’m still not getting what would like to achieved.

My main goal is to access via WiFi the configuration page of my GL-AR750 (to then activate the ExpressVPN), being still connected to my Fritzbox network.

As said in my initial post, I’ve been following this video-guide in order to link the 2 routers.
I then assigned the following IP addresses and IP pools as in picture below.
But I soon realized that if I use the WAN port as LAN to connect the AR750 to the FritzBox, I cannot use the OpenVPN function.
On the other hand, if I use the WAN port, I cannot access the AR750 anymore since it’s receiving one address (192.168.188.21) from the FritzBox which is different from the one I’ve assigned to access it (192.168.188.2).

Any recommendation on what I’m doing wrong ?

Thanks a lot for your support ! 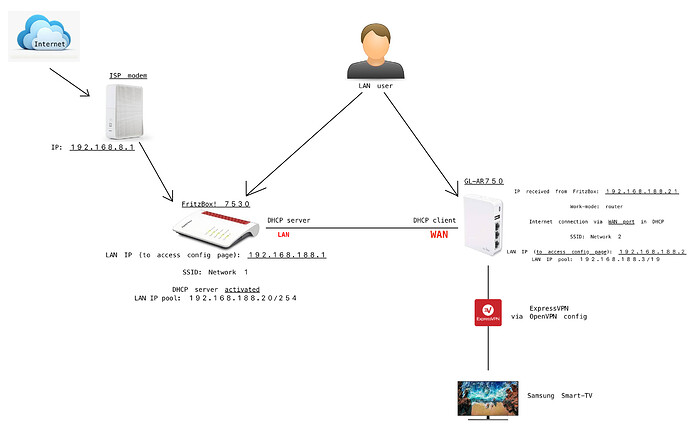 I don’t know much about Fritzbox’s capabilities but why does it need to be there in the first place? I mean, why not just use Gl.iNet as your main router and avoid double NATing and all the problems that this involves?

Hi @Almahadeus, because I have other repeaters and smart-home systems linked to my FritzBox, which makes it essential to be there as 1st router. The GL.i it’s an “accessory” router taken to use VPN on my Samsung SmartTV, since no ExpressVPN app is available for Tizen OS.

Thanks monnolo. The reason I have asked is that I needed a similar setup and ended up using GL-MV1000 as my main router for its VPN capabilities and to it attached a powerful AP to which all my other networking, smart home and other devices are attached. I was actually pleasantly surprised to find that Gl.iNet could cope with the access point and 60+ deviced connected to it as well as doing VPN with no much difficulty.

Not a problem @Almahadeus. Unfortunately in my case this switch between main routers is also not possible since the FritzBox is physically located next to the ISP modem, while the GL.i is attached to the tv in another room.

I still believe there should be a way to achieve what I have in mind. Don’t think indeed that this is a “crazy request”, but at the moment it’s out of my knowledge-range and would need the input of someone more expert here in the forum

try just conecting lan ip interface of ar750 to 192.168.188.x static. no dhcp server and use fritzbox dhcp and set lan gateway for ar750 to point at fritzbox.

to then activate the ExpressVPN), being still connected to my Fritzbox network.

what do you mean by activate express vpn

that’s indeed one of the try I’ve done: in the AR750 Internet configuration page I’ve assigned the following static address (192.168.188.3) for its connection with the FritzBox (with WAN port used as such), but the router configuration page still resulted to be unaccessible either connecting to this address, either to the one assigned to the router in its “LAN IP” page (192.168.188.2).

As additional try I also setup the same address both as static IP for its connection to the FritzBox and in the “LAN IP” page, meaning 192.168.188.2.
But once again the router configuration resulted to be unaccessible when connected to the FritzBox network.

what do you mean by activate express vpn

I mean that the whole purpose (for me) to buy the AR750 is to install my ExpressVPN vpn account in it and have my SmartTV connect to it in order to access location based streaming services.

I admit to being a complete newbie when it comes to networking but isn’t the whole idea of a VPN to secure and isolate your network from everything else apart from the tunnel it passes through (which I assume cannot be controlled in a commercial VPN like the one you are using). If what I am imaging a VPN to be like is anywhere near true, then I think that we you are wanting to do should not be achievable simply due to the separation that VPN would force you to create.

my SmartTV connect to it in order to access location based streaming services.

which I would word for example
I bought a router to use with express vpn. but I need to be able to…

I bought a router to use with express vpn. but I need to be able to…

…enter the router configuration web-page (to turn on/off or select the VPN servers) without having to connect to it directly (via LAN, WiFi or also via remote access). This router is the AR750.

The AR750 is connected to my main router via ethernet cable LAN to WAN (FritzBox).