Hi everyone,
my AXT1800 Slate with active DDNS option, in Gli admin interface > Applications > Dynamic DNS > DDNS Test shows bad output (see example in the picture). While DDNS works fine and the router allows itself to be discovered by services (VPN and others) from the outside my network.
The problem with the incorrect output of the ddns test was from the start of use that device with all firmware, even after a clean installation. This router is pre-order model.

My AR750S with snapshot of FW 4.2 shows correct ddns test output picture, so I’m not sure if it could be my upstream router, the function itself works fine, only ddns test not. 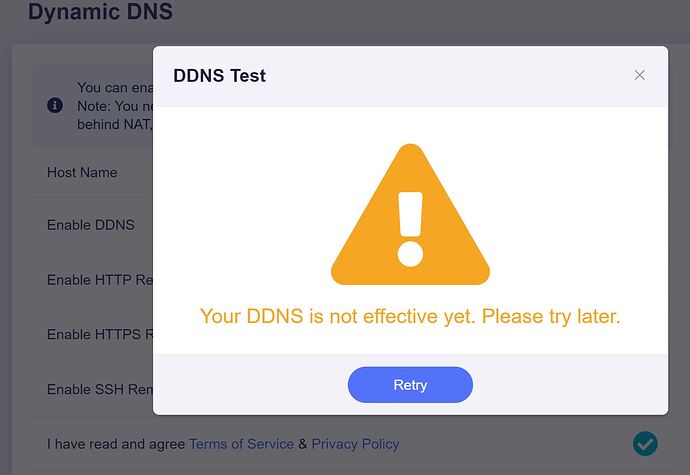 What I already tried and it did not bring luck:
Mobile LTE Network / other browsers /FW revert v4.0 - 4.1 > the same picture - your ddns is not effective

In reality, the DDNS test is not very accurate. It has too many caching issues and cannot handle ISP NAT and VPN issues.
In version 4.2, the testing method and result display will be optimised. The router will only compare the IP resolved by the DNS server with the router’s WAN interface IP.

It should be buggy in certain versions.

As long as your ddns works it should be ok.