Brume and Convexa B setup help

Ok, some assistance from the networking Gurus.

Want to put my Brume at the head of my network for Wireguard and routing duties (I think , see below if putting Brume inside my network is better

As I see it I’ve got 2 options

In this scenario I have the Brume dishing out DHCP addresses to the entire network. I’ve got a single subnet and avoid “double NAT”. Is it just as simple as just turning off the DHCP server on the master B1300? 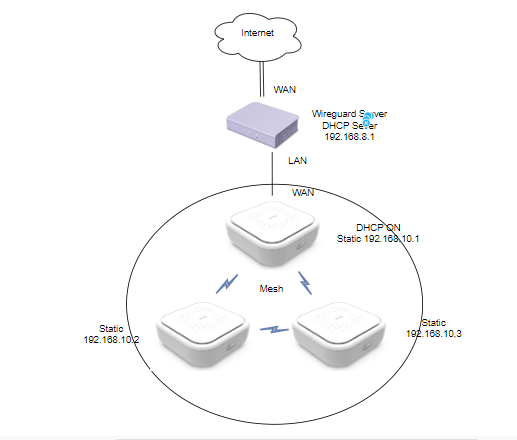 Can’t actually see how to turn off DHCP in Gl.Inet inteface either. Assume I’ll have to do in LUCI.

Dhcp server off only in luci.

I wonder why you’d need 2 routers, since you also have got the ISP-router?
In the ISP-router’s firewall you map the WireGuard port (eg 51820) to your ConvexaB, where you’ve got your WireGuard-server set up.

Nah the Brume will plug directly into a fibre Network Termination Unit (NTU) so no ISP router. The Brume will effectively replace any ISP router for wireguard and router services and the B1300 for mesh.