Hello, I think I found an issue with how MV1000 handles interfaces. OpenVPN will not start with my 2nd LAN Interface running. I noticed the MAC Address for LAN0 and LAN1 are the same? They were not before my changes. Logs are at the bottom.

Edit:: I defined the gateway and broadcast on LAN1 and this caused issues as I had two IPv4 Upstream under my status page, so this peaked my interest. Removing those to fields has fixed my reboot issue. Thank you for the help @alzhao

The following images is for MT1300. 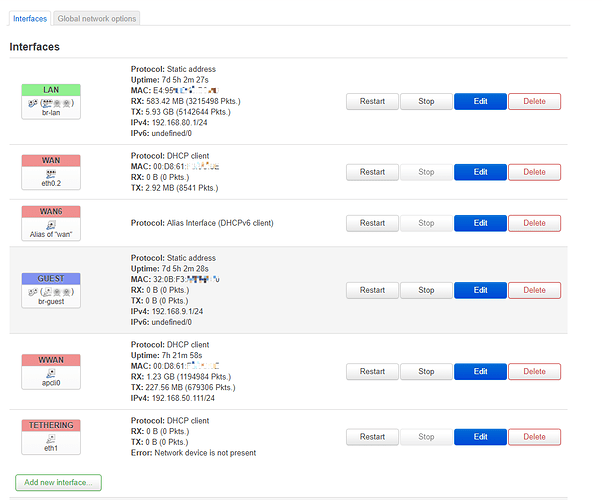 I also have the MT1300 and I can create a separate network just fine on that device. I needed more VPN power so I bought the MV1000.

The MV1000 does not have a guest network by default.
This is a software issue with gli firmware.

The only solution I found was to not bring up Lan1 interface and have a script do it 30 seconds after startup. This is annoying tho.

Do you mean the missing guest wifi? As MV1000 does not have wifi, so there is no such settings. Even MV1000W has wifi, its wifi driver is very different so no guest wifi as well.

The real missing things is vlan configurations. We will have this in next major release

I think I found my issue. I defined the gateway and broadcast fields on the LAN1. With that removed, reboot works fine. Thank you @alzhao