Woah! We reached our goal in a few hours! The early bird offers are still available!
Back us on Kickstarter: Brume-W: Pocket-Sized Wireless Gateway For Edge Computing by GL.iNet — Kickstarter 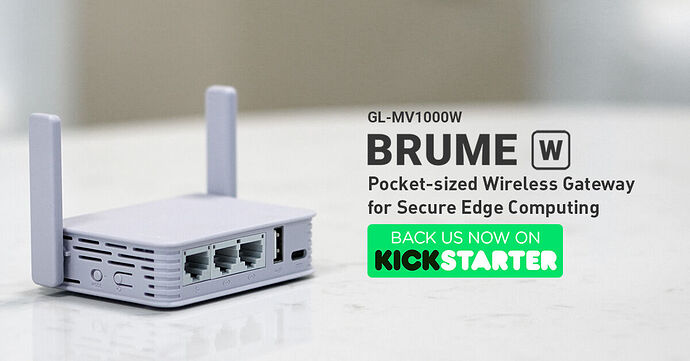 @panpan I am extremely disappointed with the Brume-W (GL-MV1000W).

Firstly, I love GL.iNet products - you guys are making some really special devices here that serve an underdeveloped market. I have supported you on Kickstarter, because I love your company, not because I think the Brume-W is a good product for 2020.

My issues with the Brume-W:

The only difference between it and the Brume GL-MV1000 are the external antennas - the original Brume also has the 2.4ghz wireless chipset built-in but was disabled.

The USB port is 2.0 - so upgrading with an external WiFI USB adapter will not give significant improvements over the internal WiFi. It also limits the throughput of external broadband dongles or network adapters.

4. Competitors are pricing similar products at MUCH lower prices

NanoPi R2S is US$22, nearly identical specs - as you have said to comments on the project, the Brume-W is not intended to replace a WiFi access point - but the NanoPi R2S can do all the non-WiFi parts great too, just as good as the Brume.

The reason why I highlight these is in the hopes that you may continue to develop the device into a better product before release, this will help not just me, as a backer of the project but the commercial success of the device as a whole.

Again, I love GL.iNet, and hope for nothing but the continued success of your company.

Thanks for your love of our products and comments.

But we cannot develop products, freely as we wish. There are limitations.

Finally pls do not forgot all our effort to put the software and UI running smoothly out of the box. Only consider hardware specs is not really a good comparison.

But, you will see our small box with very affordable prices later, without all our great stuff
It will never replace MV1000.

I understand there are limitations but I wish you would push the boundaries just a little bit more.

To simply add 802.11n 2.4Ghz wireless, which you admit is not going to compete with any commercial router, was disappointing. Why make something that isn’t the best?

Even the Raspberry Pi comes with dual band WiFi5/802.11ac - not sure why your project graphic implies that it doesn’t have WiFi.

Completely agree that you’ve made a delightful software experience! Please do not take my criticism as a rejection of your products or company philosophy - I just want you to perform even better than today.

The reason for the product is that a lot of people have been using the MV1000 with an external usb wifi dongle. The dongle and the MV1000-W with the wifi built in, end up doing the same, in a smaller package.

You are again comparing products that are not made for routing. A raspberry pi can not handle more than 5 or so clients because the networking is just not there. It is made to be a client, not a router. Doesn’t matter what the specs say, you need to dig deeper.

Remember the raspberry pi has a pcb antenna, in my own tests it is very directional, you want to point the antenna towards your router to even have the best performance as a client.

No matter which product you look at, the Raspberry Pi, the NanoPi, the GL products will always have better routing, as the chips used are designed for that.

Going back to the NanoPi, you can see in a lot of benchmarks that the case they copied from the GL microrouters is not adequate for cooling. The device is constantly throttling, you don’t get the full performance and it gets extremely hot. A quote for tests in their official store comments:

Sorry but even if it costed 10 dollars, at 71C i would not want to carry it with me, unless i want to warm up my coffee too?

The NanoPi-R2S - Not one to sling things at FriendlyARM, but this is not one of their better efforts - it’s unfortunate they chose the form-factor/case design that closely mimics the Mango device… 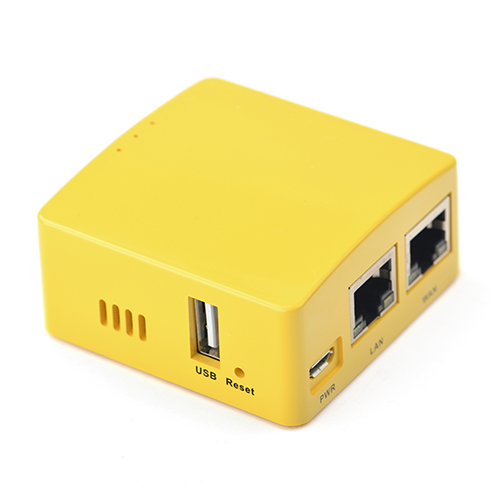 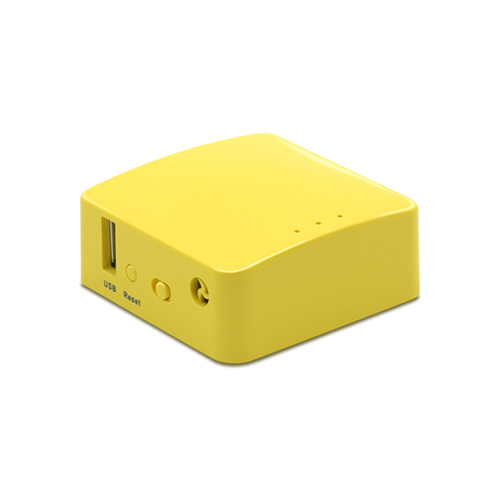 Over on Armbian forums - I did call them out on this.

Anyways - enough of the FriendlyARM device.

Will it support PPPoE ?

USB2 is 480Mbps - with framing overhead… it’ll be lower, but still good.

That Alfa device is based on Realtek RTL8812AU

NonaPi R2S? do not mention that it copied our case design?? It does not comes with professional Gigabit switch to work as router. We of course tested the chipset RK3328 before when we make MV1000 and we fully understand how much it can perform. Maybe compare it to raspberry pi.

The RK3328 is an applications processor, not a communications processor - different performance profiles. I doubt that the RK, even with a switch, would perform as well as a dedicated SoC/Switch combo like Brume…

Personal Opinion - anything Rockchip is going to be a challenge, not that they can’t be dealt with, but it is what it is…

Brume or Brume-W - it’s a good product… the $10 delta for the wireless version for some, it’s a win.

I think so. PPPoE is network protocol so only software.

As a rule, if OpenWRT supports it, GL.iNet products will. The main interface is just an overlay over OpenWRT - if you go into Advanced Settings you’ll get the full OpenWRT experience, if required.

Must have glossed over - I was somehow thinking POE, not PPPoE - yeah, should be supported, if not directly in the SW, as a plugin…

Are you by any chance considering the B1300 form-factor device with armada CPU, but reliable wireless device?

Are you by any chance considering the B1300 form-factor device with armada CPU, but reliable wireless device?

Will this be a popular product?

Are you using proprietary or OSS driver for the wireless device?

I can check. I think it can be open source but I need to double confirm.

Will this be a popular product?

Well, depends on the pricing I guess. The WRT3200ACM/WRT32X are still the most powerful consumer routers and the SOC seems to work fine, they have had major problems with the OSS drivers tho, so WiFi was never as good as on some other SOCs. If you can manage to bundle a powerful ARMADA SOC with a reliable OSS driver wireless chip at about US $150 (or a WiFi6 chip at about $200-$250), it could easily become the premier OpenWrt router.

Because of the outdated WiFi driver in WRT3200ACM I’ve switched to a split router/AP set up and I’m now using the MT7621-based ER-X as my router; the CPU-intensive blocklist processing in my simple-adblock app is taking significantly longer on ER-X than it used to on WRT3200ACM.

I can check. I think it can be open source but I need to double confirm.

Also, could you confirm which wireless device is it?

I check the code of wifi driver and it should be open source. But I need engineers to clear everything before put on github.

Thought about new router. The next router has to be wifi 6. There are some active development of open source wifi 6 drivers. Not sure when they can be used in a commercial level.