Easy way to check the speed on a Gl.iNet LAN port?

Hi. Not too good on networking and was just wondering if there is an easy way to check the speed on a Gl.iNet LAN port? The reason for asking is that my old Asus router used to report on the speed all of its LAN ports and had picked on problems with my ethernet cables in the past not achieving full speed (gigabit ports). I would love to be able to do the same on my G.iNet router to check that the ports are delivering the full speeds. Is this easily achievable?

I do not know how to do this with the GL iNet GUI, but if you ssh into the router, you can run:

Which will show you the speed. I used this to debug a bad cable which was limiting my connection speed to 100MB instead of 1GB.

Excellent tip and thank you for the rapid reply. Do you know if the speed reported is what the port is capable of or is it the actual speed being utilised? Also as I am using the Brume (MV-1000) with x2 LAN ports, do you know which port is eth0 and how is it possible to check the other one? Thank you again for your help. 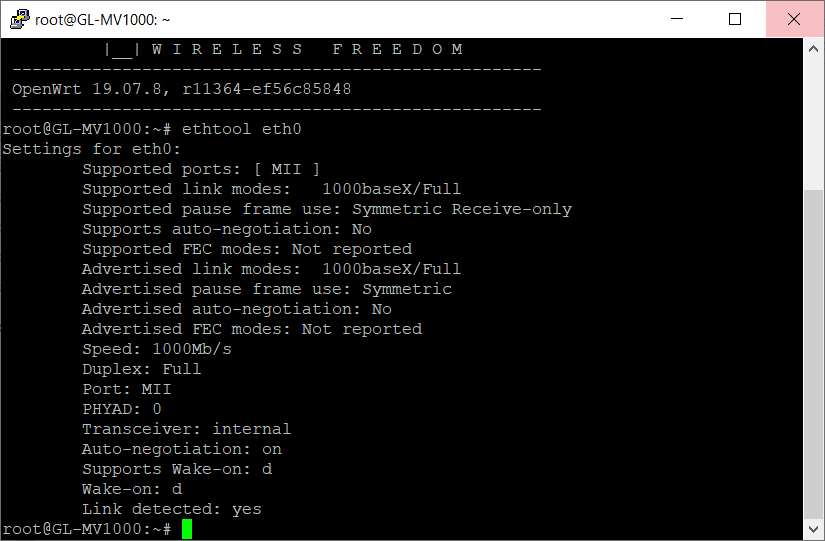 Going from memory, when I was having issues, the “Speed” line was showing 100MB and not 1GB, so it was showing me the speed it was connecting at. You can also get speed info using:

Thanks Eric. Exactly what I was looking for.