All of this functionality is pretty easily accomplished in CLI, so I’m surprised it isn’t implemented. For @alzhao or anyone who can answer - is anything like this planned? Particularly for a travel router, 2 and 3 seem critical.

In messing around more, some of this stuff (exit-nodes) works in CLI, but only if you go into Luci and assign the tailscale interface to firewall rules which pass traffic. The performance on the AR750s was… well, not good, tbh. Against my better judgment I may sacrifice an A1300 for the cause…

Update 2: things work… less well on the A1300. I can get TS to connect to my custom server, and I can set an exit node, but the A1300 doesn’t send traffic out, and LAN clients don’t send it over the exit-node, even with firewall rules enabled.

Ultimately exit nodes are a thing that just have to work on any Tailscale implementation for it to actually be useful at all as a travel router. This could solve a lot of the random “Why can I not get X VPN to work?” questions we see on here, so it would be super nice if we could get a good implementation.

While I would never hold out pfSense as the pinnacle of UX excellence, their decisions here have been pretty good:

I feel like implementing this would be a game changer for a lot of people who need a quick, easy travel solution that just works. I’m happy to chat through and test solutions if that would be helpful.

The target of developing this page in the version is to help rookie users get started quickly. Therefore, it will not contain particularly complex functional settings. Especially it can be done in the Tailscale console.

Using the device bind link is not a great method for authorization. Using preauth keys would be far better.

Using preauth keys is more difficult to use and relatively unstable for new users.

The WAN/LAN access slider isn’t great. I would separate those out at a minimum, pushing just the LAN route or an allow-exit-node route (which would necessarily include the WAN).

Yes, we have discussed it. They should be separated.

The target of developing this page in the version is to help rookie users get started quickly. Therefore, it will not contain particularly complex functional settings. Especially it can be done in the Tailscale console.

I don’t see exit nodes as a complex setting. I see it as the essential setting for this product.

Using preauth keys is more difficult to use and relatively unstable for new users.

I disagree, especially when the bind link is blocked by a default pop-up blocker. (Which it is).

Especially it can be done in the Tailscale console.

Will it be possible to do things in console and not have the GL.iNet implementation overwrite the settings? When trying to do things in console on the A1300, if I enabled Tailscale in the GUI after setting a custom server in console, it essentially went into a “tailscale down” / “tailscale up” loop because the GUI process monitor didn’t know how to deal with a custom login server. It’s one thing to not implement advanced settings. It’s entirely another to have the GUI conflict with / overwrite advanced settings.

I assume this shouldn’t happen: (on a freshly reset A1300) 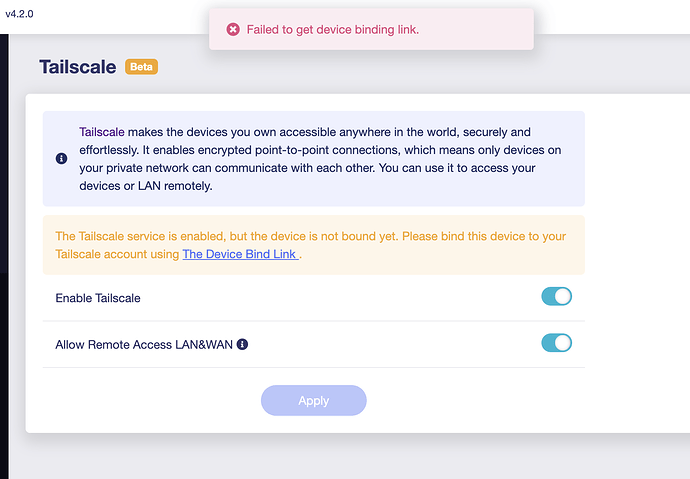 After doing a manual console “tailscale up” and generating the binding link that the console could not (and having it stay up and not constantly reset itself), I get this result:

edit: just kidding. I went over into the Luci to add firewall rules so I could ping the Tailscale IP for the router, which works… except now we’re back in a tailscale up/down loop.

So basically Tailscale functionality is completely broken/unusable, at least on an A1300.

I disagree, especially when the bind link is blocked by a default pop-up blocker. (Which it is).

I assume this shouldn’t happen: (on a freshly reset A1300)

Thanks for your feedback. We will discuss this again in order to provide a better way of getting started in the interface.

Will it be possible to do things in console and not have the GL.iNet implementation overwrite the settings?

I don’t think it should overwrite. We will analyse this.

There are multiple issues at the moment:

If there is a different router I should be trying this on I can try that (though I’m probably not going to mess up my AXT1800 since I’ve finally gotten it stable on a clean build).

Full reset on the A1300, and more testing. Updates:

At the core, it looks like the main issues here are firewall rules, as well as some general problems in the scripts that are calling Tailscale up/down.

Ultimately, everything needs to work, but the real priorities are:

It would be nice to be able to use the new features in 1.34 (login to different accounts), but that’s a much lower priority.

Exit mode appears to work at the router level in 4.2 beta 2, but client traffic does not pass over the Tailscale interface.

but client traffic does not pass over the Tailscale interface.

Happy to test if that would be helpful.

just started looking into tailscale but immediately feel the need to be able to choose an exit node from the gui,

Tailscale connects, and router can ping:

… but clients connected to router cannot:

If you disable tailscale in the gui, edit the init file to not check the enable flag, restart the service manually, go into Luci, add a tailscale interface and enter the appropriate firewall rules, then you can get Tailscale access on the lan:

What you can’t do, still, is use an exit node. It fails in various ways - initially by not passing traffic at all, then by bypassing the tailscale tunnel and passing directly to the internet.

The client issue has been resolved, please try the latest snapshot or wait for the next beta release.
The export node issue is still being worked on.

The export node issue is still being worked on.

ETA? I’m guessing not before Monday.

I’m guessing not before Monday.

I think so too…

Excited to see TailScale coming but I hope more work is done. A lot of these options like choose exit node, set WAN/LAN preference/access, and a host of other choices should be in the gl.inet GUI - not required to go to LuCI or to command terminal to access or configure. It’s pretty rough, i’d call it Alpha right now.

EDIT: And I understand the preference towards newbies and getting it easy to setup BUT there should then be an “Advanced” pane with the other options. Something simple like that, best of both worlds. TailScale is incredible but it has a plethora of settings, options, and switches which need to be configurable and easily accessible to be of utility. In a travel router, even more so.