Unless i reset to the router defaults it always fails on update, so can anyone tell me which is the file to download for the router 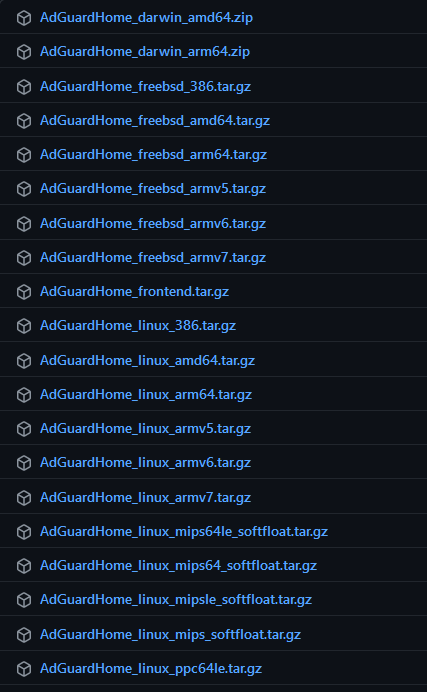 Hmm how do you update adguardhome just by the opkg manager inside the gl-inet web interface or via adguardhome itself?

From what I know the update button on the adguardhome web interface is unsupported although sometimes it ‘works’ and you could get away with it, it may start doing unwanted things or even give space issues.

Note I’m not using adguardhome, but I believe this button is not a official update by gl-inet packages.

Hi thanks for the reply, yes via the web interface settings you get a reminder that a new version is available click update and it fails every time unless you reset the firmware update AdGuard until next update, but on the GL-MV1000 this is never a problem, I checked there was space left for the update 61% used

Yes that update button updates adguardhome natively but isn’t fully supported, its the same button on other non gl-inet devices if adguardhome is installed.

What I think why it might fails on flint is because this update might depend on higher kernels or dependencies with higher kernel, though I’m not aware if the native update process also compiles binaries or just requests these when they are not on flint.

What errors do you get after this update ?

I am on a tablet at the moment so I logged into the router to try the update to give you a screen shot of the error and it updated I am totally amazed, so it may depend on different operating systems or browsers, but you have hit on another good point because it uses an old version of LuCI, I know a few other people have had this issue so I would recommend them to try a different browser once you have check you have available space left.
Thanks for your help

But do you know the file to download for future reference

If I were you I would only neccesary update the opkg package, because that one is compiled within the kernel whereas the update from the adguard may not, sometimes a update can just be a change to the config or init script, but other times it can use a library which is not present due to the kernel limitations, neither do I know if it also compiles libraries or dependencies within this update process, alot could go wrong with this update process, but that is just my opinion.

If im correct openwrt has also a adguard package I believe, the closed you can test is trying to compile this with gl-inet sdk on ubuntu, but if that package uses nfttables you even get a more bigger challenge since the latest version of openwrt is going to use nftables rather than iptables which is not in the kernel of flint I believe, or alternatively if you got some programming experience you could checkout a old version or find the source and backport the updates and cherry pick so you can ignore the nftables commit.

But I’d agree this is not suitable for normal users, luckily this limitation will not be forever but it needs time, Im also actively reading the openwrt forums but they still wait for patches by codeaura (qualcomm sdk which is a modified openwrt with closed wifi drivers where flint is based on).

More ax routers from different brands seem to have this limitation of qsdk, but from what I readed is that ipq80xx is being heavily developed on and it has smilliarities with ipq60xx so I’m positive it will soon or late get a updated kernel, also I noticed openwifi, if that can do the same as the closed source drivers by having a quick glimp at their github, the updated kernel could even come earlier, but again I’m not a team member I’m just a opensource enthousiast😁

Are thank you that’s useful

Radiocrazy
Did you just SSH into the router delete AdguardHome directory and then install the Linux_armv7.tar.gz?
how is it working? everything accessible from Gl-inet GUI?

HI, no the problem on the AX1800 seems to be space if you go to the directory of AdGuard agh-backup and delete its contents it gives you much more space, or use SCP to replace with the latest AdGuard