Hello,
I’m trying to forward some ports of my IoT cameras via VPN.
So far I’ve been unable to setup correctly my GL-iNet router properly with AirVPN to have just 1 port open. I don’t know if I messed up the local/remote port that AirVPN gives me, or if its simply not possible with my current setup.
I’ve read tons of posts and tutorial, but maybe I’m missing something. Some mention pfsense & opensense, but where should I install these tools? on my 2nd router?
And if my current setup should work, anyone could tell me how to setup the ports properly (local, remote, on the GL-iNet interface and on AirVPN ? and should I open the port as well or just forward, I’ve tried every possibility.) Here is an overview of my setup: 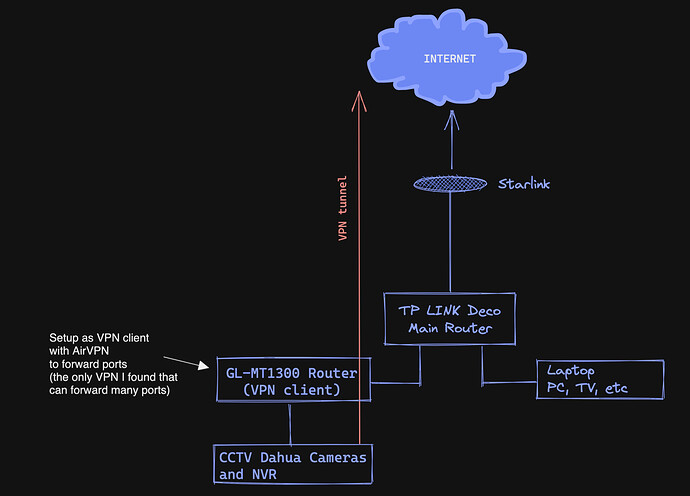 On your Airvpn pls do according to their guide. I don’t have their account but if you have a doubt pls post some screenshot from their portal.

For MT1300, port forward from VPN zone to the IP of your CCTV. No need to open port because port forward does that automatically.

No need to do anything on your tplink.