Thinking of buying BL-1300 3xMESH units to replace my Eero V2. Problem I cannot seem to be able to find reviews of the BL-1300.
The reason I’m looking is mainly because eero doesn’t do pppoe. My preference is to run a seperate modem and seperate router with router doing the pppoe and LAN DHCP etc.

Has anyone had experinece with the B-1300 as a mesh? I must say the eero is very robust and works really really well. My VDSL line gives me 67Mbps.

We had some problem in the firmware but we fixed it. Now the firmware of B1300 works good and performance is good as well.

We should send you a new firmware if you buy from Amazon.

I bought it last night from amazon uk. it will arrive tommorrow. i only bought one to see how wll it functions as a gateway first.

Hey, whats your impression of the B1300? Hows the wifi coverage and how is it handling your line (assuming you are using it as main router)?

I was dissappointed. I set it up behind my bridge modem as a DHCP server for my network and it was very slow… my internet speed dropped a huge amount…

Did you use vpn? Without vpn B1300 Ethernet is above 900Mbps. Why your internet speed dropped.

Wow that bad? the SoC is supposed to be capable (at least better than the MIPS based ath79 targets).

Can you share some numbers on how much it dropped? also compared to your current hardware?

Are you running stock FW on it or vanilla openwrt/LEDE?

I’m wondering if anyone knows the wired NAT throughput of this router with either (or both?) openwrt and stock firmware? I’m thinking of using this in a pure wired edgerouter application and want to get close to gigabit speeds if possible.

I only use plain openwrt with mine, and I’m able to max 500mbps (my isp speed) with it…

Note the cpufreq governer on ipq40xx targets is too slow in response to load, so if you manually set freq to max it will perform admirably, I don’t know if it will max your 1gbps line, but to give you an idea, I get consistent 500/100 on speedtests, and I get near 480mbps on iperf3 runs between the router and a PC on wireless (480 wireless for the wifi isn’t bad… given the ipq40xx platform is only 2:2 streams).

I bought a few B1300s as they seem simple and well built, one disappointment however is the lack of a heatsink that appears in FCC and some pics online: 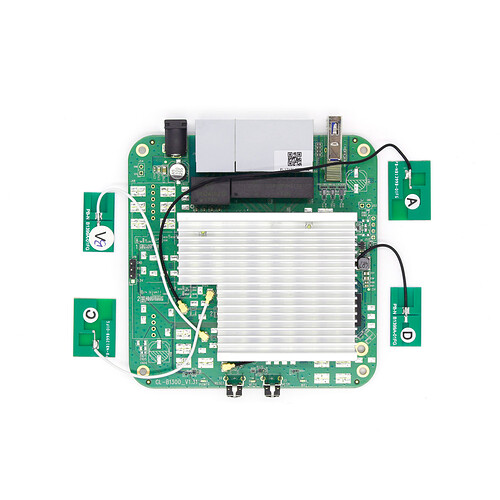 When I opened up my unit it didnt have heatsinks… given I sometimes really push those routers with many tasks, I would’ve liked it if what I received matched what I found online… but hey, they work fine so no harm I guess.

Great info, thanks. I don’t suppose you know what the cpu on the router is at when you max at 500mb?

I don’t think that will be a good indicator as I run many apps on the router itself. Stream 4k content over wifi to tv (5ghz band), download torrents using router itself (to usb3 disk attached)… etc

I think the ipq40xx is one of the best platforms for openwrt at the moment, ipq80xx is crippled because NSS cores are not in use.

ipq40xx has 4 normal arm cores for all tasks so its fully utilized. You might want to consider mt7621 since it has hardware acceleration and could get line speed, but running other tasks like the ones I mentioned, the quad ARM cores are more potent.

Are we still forced to TFTP to load OpenWRT? I’m thinking of this as a ‘travel router’ for long term hotel stays. I like keeping my Slate in my backpack.

Found a relevant discussion on OpenWRT forum, seems simple enough: How can I flash a Openwrt image on GL-B1300? - #2 by jeff - Installing and Using OpenWrt - OpenWrt Forum

For best performance on the B1300 you should run the latest gl firmware and not just vanilla openwrt.

Update it using the UI and download the latest testing firmware from here:

@SeattleSunshine
You can use the uboot webUI to load openwrt, power on the unit with the reset button pressed, then access 192.168.1.1 (http, not https) and drop your sysupgrade image there.

@Johnex
Actually on ipq40xx targets performance is almost identical. Its the ipq80xx that really benefits from Qsdk (enables the NSS cores).
Apologies if openwrt is offtopic here, but given we are discussing GL.Inet products, I figured it would be fine

We have discussed this extensively, you can read here:

It’s mostly the WiFi drivers - QSDK has this sorted already - both for Wave1 and Wave2 - and the MESH stuff. The ath10k drivers for IPQ40xx - still a bit under development, and Wave2 features are needed a lot of work - and no MESH. Smart choice by the GL-iNet team to stick with QSDK for now…

Vanilla OpenWRT is missing quite a few features from QSDK to be recommended.

Vanilla OpenWRT is missing quite a few features from QSDK to be recommended.

Things are getting better over in OpenWRT land on the IPQ40xx - but WiFi is still a bit in flux on Master for the ath10k drivers.

QDSK based builds are still recommended, as this has QCA’s closed source drivers there, along with other proprietary items.