Hello, I have a GL-MT300N-V2 configured as explained in this thread (I post also a summary image to show the actual configuration):

GL-MT300N-V2 - Help in how to route all traffic: WAN - LAN and OpenVPN - LAN Product Discussion 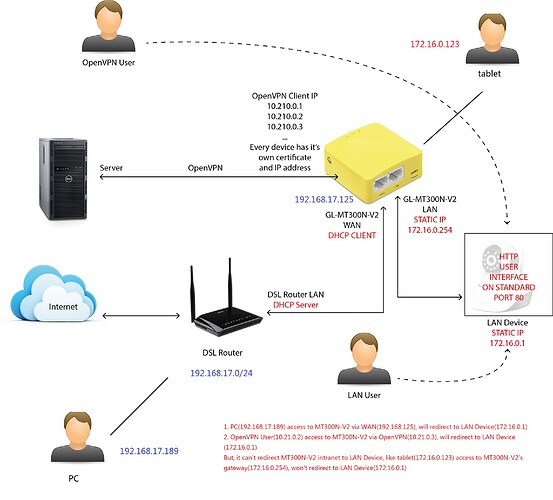 The system works correctly, the GL-iNet connect to the VPN server, it allows the navigation to the LAN connected device through WAN, VPN, and LAN. Also through WiFi, I can access to the GL-iNet interface to it’s IP 172.16.0.254 and to the LAN connected devices typing 172.16.0.1.
I’m also able to open the LAN device interface directly from the OpenVPN server.

In this case, I think it lost the VPN connection. You can try to reconnect it.

Hi, thank you for the answer.
The OpenVPN does not disconnect, it continuing answer to ping.

Which host is the ping target? The VPN server’s gateway?

So the VPN connection must be lost. If you reconnect it, it should work, right?