(This “peer” stuff really clouds the waters, IMO- I get that it’s supposed to be a two-way tunnel, but one end is the “server” that waits for a connection and the other end is the “client” that connects and I really wish they’d used that terminology.)

why do I need an IP address for both ends?

Your client will configure the wg0 interface with the ip address associated with that peer. Just like your router assigns your device a private IP to talk to it on 192.168.8.x. Each peer gets its own assigned private IP on a private subnet associated with it’s Peer Public Key.

But I’m more worried about how I never see a single packet make it into my server’s eth0 interface to even be handed off to the wg0 interface on my server. I don’t get any error messages either other than “timeout” (on the 750S; the Android client pretends to be connected but nothing happens).

… and what are “Allowed IPs” on the client end? That should just normally be set to “0.0.0.0” if I’m trying to route all traffic via the VPN, right?

I see the packet make it thru if I watch my box’ main ethernet via tcpdump -vv -i eth0 ( udp and port 51820 ). But at no time does a UDP packet from either the 750S nor the android client ever come thru

I suggest you sign up for a free account at AzireVPN - they offer a 1 day free trial for their regular OpenVPN, after that, they send you an email that says it expires, but the Wireguard service is still free while they are beta testing it. At their website, you can click a button and it will generate a zip file that the 750S (version 3 firmware) will configure everything for you. You can then see it work and look at how everything is configured. Then get your own setup going if you want.

I’ve allowed port 51820/UDP to connect to my NUC’s internal-LAN IP address (on eth0). And when I watch for traffic on that neither client even attempts to generate traffic that makes even as far as my Google WiFi apparently.

PM me your referral code if you have one, if you want.

Did you port forward on the router? I guess the Comcast is just a modem (no firewall?) and the Google Wifi is your home AP with firewall that needs the port forwarding, and the NUC is the server that also has some sort of firewall on it?

Yeah. I’ve got Plex/SSH/OpenVPN/VNC servers all running on this same device. No firewall on the NUC (just some iptables rules to allow masquerading for the OpenVPN server, and I’ve added a tentative one for the Wireguard, if any traffic would ever get delivered there).

But yeah, I can see incoming traffic if I fake up some via nc, but none from either WG client.

Sounds like the clients aren’t configured right? See if the Azire works and adjust things

Yeah, maybe. I’m going to let it go for now, but I’m confused as to why it doesn’t even attempt to generate any packets. My “Endpoint Host” should be given in the form “my.full.hostname.com:51820”, right?

Here’s a screenshot from my AR-750S’ config page: 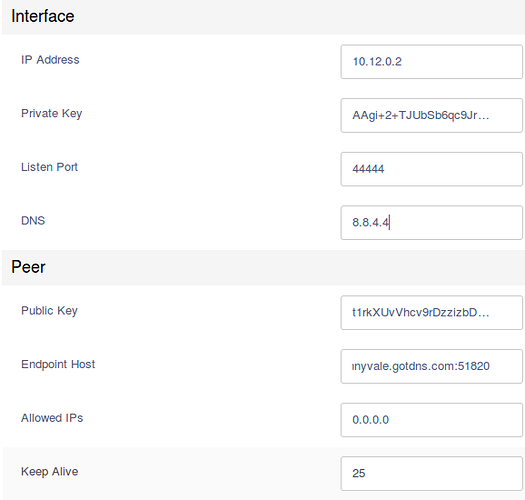 Hitting “Connect” generates no traffic on my end on port 51820. Unless that part works nothing else can.

you do have the peer section set up on the host right? not clear from your first post

I’ll keep playing with it, removing keywords and spaces and such, but it does work with another client. I know that the AR-750 works with Azire, so maybe you’re bailing on a keyword (but I can’t see what that could be)?

Manual entry seems to have fixed things. Maybe the “#” or the “Persistent Keepalive” were throwing it off? I’ll see if I can find some errors in the logs. Funnily enough, I see a red “Timed out!” error right before it decides to connect, although it’s connected in less than 2 seconds.

What’s also interesting is I had to remove the IPv6 entries (else the manual block wouldn’t validate the entries), but the Azire ones come with them.

Up and running, in either case. But that last bullet point (about the connectivity loss persisting past a reboot on a failed VPN connection) should really be looked at.

Will fix it asap, please try this.

Is there a way to override the filter? I do not want to send all traffic through the VPN, I just need some subnets.

That’s because we will force all traffic over VPN tunnel by default when you started VPN. Most users prefer this approach.

Thanks. It seems that there is no way to disable NAT on the VPN interface? I’m trying to do a site to site VPN connection, and I want to be able to access clients connected to the GL-AR750S.

Is it possible to disable NAT on the wireguard client?

Yes, you can do that in command line.

Just need to set masq to 0 in wireguard zone of /etc/config/firewall.

Just need to set masq to 0 in wireguard zone of /etc/config/firewall .

Thanks. This works, but it doesn’t persist after a reboot. Is there a way to make it persist?