However i got stuck because the SMB v1 is no longer supported by windows 10 build 1709.

Is it possible for GL Inet team to update samba package to version 4, the current installed is 3.6 and not support SMB3 protocol.

root@GL-MT300N-V2:~# opkg list | grep samba36-server
samba36-server - 3.6.25-6 - The Samba software suite is a collection of programs that implements the SMB protocol for UNIX systems, allowing you to serve files and printers to Windows, NT, OS/2 and DOS clients. This protocol is sometimes also referred to as the LanManager or Netbios protocol.

Will check on windows 10 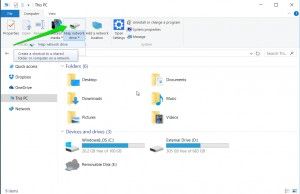 How to Map a Network Drive in Windows 10

Give network drives their own letters (ex: Z:) so you can access them quickly and easily. Here's how to map your Windows 10 network drive.

And you will have the same issue as @Dimz

@Johnex, @Dimz,
Have you tried to select your USB drive folder?
Generally, Network drive in Windows10 requires you to select a certain folder for sharing.

Well i just access it using windows => run => ip address which normally in my other sharing folder(hosted in windows machine) is working properly.

I will test your suggestion and let you know the result by this night.

**Additional information, my flashdisk was formated using ntfs and i mount it using this command

BTW thanks for your response.

I changed some fstab mount setting based on this PXE configuration guide here [OpenWrt Wiki] PXE-Boot network boot server, perhaps it break some default mount configuration.
After i followed it my usb flashdisk still mounted automatically but in readonly mode that’s why i need to mount it manually.

Will try to reset the router and let you know the result tonight.

The router default setting is read-only, you can change the writable authority and share on WAN both in the web management UI：

You’re correct, no issue on both windows 10 1709 and 1803, it seems our domain admin configured some SMB policy in the domain and effected my office laptop, for what i remember they change the SMB to version 3 (not sure) from the group policy for to block wannacry ransomware spread.

It will be good for GL.Inet team to update the SMB package if it’s possible so it will be support SMBv3, but at this moment there’s no issue to implement the windows deployment over the network.

You may close this thread, i owe you a beer. thanks a bunch