Multiple Routers Connected But No Internet

I have a main GL.iNet router. I access 2 computers with it. One computer is a work computer that has a software VPN. The other is a personal computer I don’t use for work.

Right now I use a VPN and VPN Policy on the router to make all the non-work personal connections go through the VPN on the router. If I try to limit the connection speed here for non-work connections, it slows down my work connection, which I need to be fast. I end up not limiting the speed for anything, but I want to change that.

I want to link 2 routers together. The first one connects with the internet source and also connects to my work computer. The second one will have a VPN and limit the connection speed so it doesn’t affect the speed of my work connection.

I tried doing this and it failed. i don’t get internet access from the second router when it’s linked to the non-work personal computer and firsst router, which the work computer still gets internet. Ive tried connecting in multiple ways (wifi ethernet)

They are both Gl.iNet routers. I also don’t know how to acess the terminel in the router. I know how to use the ssh command only somewhat, but don’t know what to type to get into a terminal there. I tried using the router IP address but it said I lacked the key or something like that.

Otherwise, please post screenshots of the Admin Panel pages for both routers. 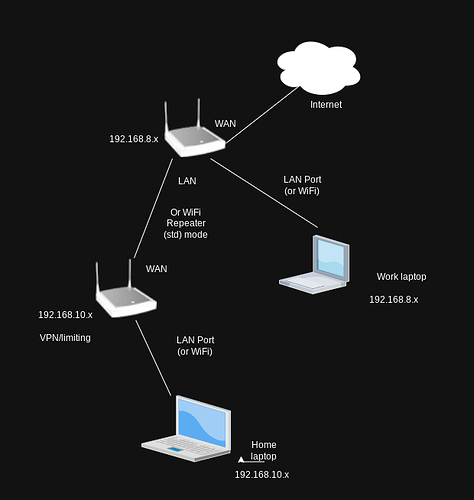 i wanted to use wifi for all connections.

the first router connects to the source wifi with 5G and then the second router that has the VPN and speed limiter connects with 2.4G

can the first modem user 2.4G and 5G at the same time? i also tried to connect them with ethernet and failed.

So you’ve actually got another router that connects to the internet? If so, you actually have triple Network Address Translation which MAY cause you issues in some circumstances.

Maybe draw up a diagram to show us what you’ve got and people can then chime in. Just sketch it on a piece of paper or some sort of drawing program or www.draw.io . Always easier with a network diagram rather than “interpreting” your situation from text.

The 3rd number has to be different between the 2 routers for Class C networks with netmask of 255.255.255.0, or routing will not work.

If you use wifi for all connections, it is good to use 5Ghz band for WWAN and 2.4GHz band for WLAN for stability and speed. Ethernet cable connections are best and it may not have worked previously because you did not configure them with different IP subnets.