Poll: Should the fan turn on earlier

So i’m curious. Personally i would like to see the built in fan turn on at a much colder temperature, with a nice smooth fan curve. It should turn on at around 40 degrees, slowly spin, and ramp up all the way to max when the SOC hits 70+ degrees. The device will have a longer lifespan since there are some electrolytic caps inside the router (which don’t like to sit at high temperatures, as the liquid electrolytic can boil off). Just because the SOC can sustain a specific temperature, it is not recommended, especially in this case where the fan is not even used in 90% of device usage and could be used.

I haven’t pushed mine to the point of getting the fan to run, but I prefer devices that stay silent during normal operation. I don’t know if 40°C would be audible “too often” or not. I probably would hate it if already having problems sleeping in a hotel room (or my own bedroom) with an audible fan running most of the night. Even worse, I think, would be one that unpredictably started and stopped.

It isn’t the starting and stopping of rotation that is a problem. A couple of mine barely run for a few seconds when the CPU temperature raises a bit, then stop. You can’t hear them at that speed, so it isn’t an annoyance. I wouldn’t even be aware of it except for occasionally catching one starting or stopping out of the corner of my eye.

I think this should be a GL.iNet Engineering/Design decision and also depends on the H/W capabilities.

Maybe add on option for user to decide in GUI when fan should start to run?

I read that gt-ax6000 and ZenWiFi Pro XT12 are fanless

The poll clearly shows users would like to see a better use of the fan.

Out of topic, but i would also like to see options for the LED in the front. I personally like it, and would like an option to make it brighter. Maybe add a slider 0 to 255 as above for the brightness.

For me, usable fan controls have (at least) a two-point system. When the fan starts ramping up and when the fan is at full speed.

That gives me enough flexibility to keep it silent most of the time, quiet occasionally, and only howling to hopefully keep from burning the thing up.

Bonus is the real-time toy (menu bar for macOS shown) Additionally, seeing the sensed temperature in the setting area is very helpful. 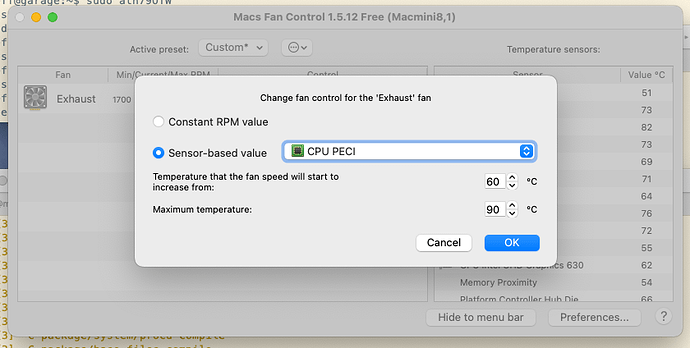 I strongly second what Johnex suggests. All of it.
Through SSH and possibly a proper package on owrt this can be already achievable, but the value of a GL.inet GUI to make those settings availabe to everybody would be huge.
This would bring the Company on par with others on the industrial side, with all the bells and whistles.

I’d like to be able to turn it off at night… It can be bright in a dark hotel room!

Agreed!!! This would have been a feature in the web UI 2.0. but here we are web4.0 and still not easy button to turn off the light on the UI. Unless I’m blind and don’t see it.

It can be bright in a dark hotel room!

… the SlateAX light?! Alarm clocks, light from behind the curtains and even light from under the door are brighter than that light!

Beryl and SlateAX. Both need a turn off or very dim feature in the UI. I always turn off/unplug all clocks in hotels

Yeah, I wish they could start using rgb led.