I have been reading about how to connect from outside the US and make it look like I am in the US and a lot of people are using the beryl product to accomplish this. I currently have a few questions and looking for some help.

I see that majority of people are using 2 beryl (1 for server, 1 for client)
Questions:
-When setting up the VPN server, do I need to connect it to a service such as Mulvad VPN, Nord? Or can I create my “own” VPN connection ?

Also, reading on how to setup the wireguard server, it states that if I am connection the brume or beryl to a router, I need to do a port forwarding. This is my current port forwarding option in my belkin rt3200, and would like to know to which port I need to “forward” 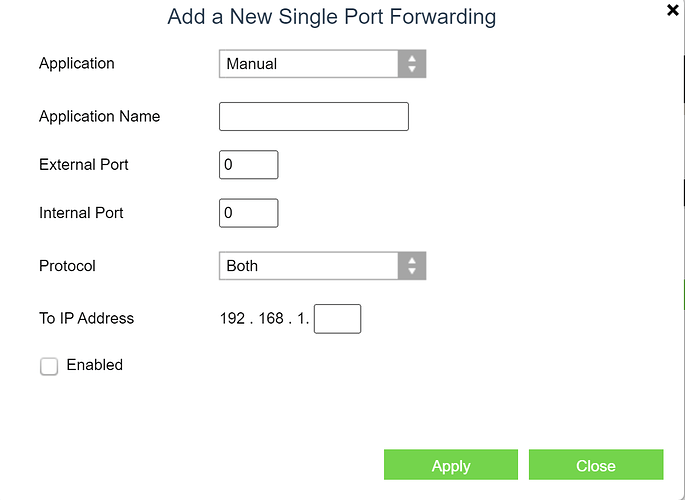 The whole idea is that I don’t want to connect any device via Wifi, only ethernet.
Thank you for your help!

-When setting up the VPN server, do I need to connect it to a service such as Mulvad VPN, Nord? Or can I create my “own” VPN connection ?

You can spend money and buy a vpn server as a service (mulvad, nord, etc), it usually provides more exit points in different countries.
Or do not spend money and set up your home VPN server on a Gl device (or directly on your Belkin router, if it supports VPN settings) and have one exit point with the location where this server will be located. In your case, this is your home.

Yes, Brume2 can be configured as both a VPN client and a VPN server

Yes, sir, you can

If I were to use a beryl to travel, can I connect a switch so that I can connect more computer via ethernet?

Yes, an ethernet switch will allow you to connect more devices to Gl routers.

This is my current port forwarding option in my belkin rt3200, and would like to know to which port I need to “forward” 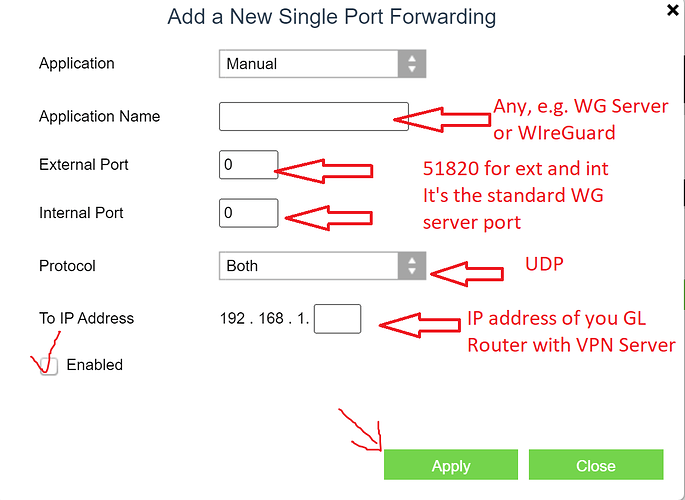 Third, for a home VPN, you can usually control which ports you’ll use, either in the forwarding or for the server. Many routers have relatively low security VPN servers (username/password rather than certificates), and this is a weakpoint. Moving openvpn off its default port of 1194 and WG off its default port is usually a good idea. (OT: why does wg have a default port in the dynamic range?)

I see that majority of people are using 2 beryl (1 for server, 1 for client)

I would not agree with this. It depends on when someone purchased their home VPN server and client. There are many people using GL-AR300M and GL-MT300M-V2 as home VPN servers for both Wireguard and OpenVPN. If your home Internet uplink speed is 40Mb/sec or slower, then there is no need to use a Beryl or above as the AR300M and other older GL iNet routers will handle that rate with Wireguard.

I have been using a AR300M for a long time at a family member’s house, as their uplink rate is only 35Mb/sec. I have modified it to work as an OpenVPN, SoftEther and Wiregurard VPN server using multiple ports, as with multiple protocols and multiple ports, it is harder to block it. One advantage of the AR300M is it has a lot more flash memory, allowing me to load more stuff than I could on a Beryl.

My remote router is an GL-AR750S-EXT. I been on constant travel, most of it outside the US, for well over a year using this setup.

Or better still, you can use a relatively cheap VPS or dedicated server. Plenty of bandwidth and generally not blocked by streaming services. Does require extra setup and knowledge, however.

Any recommendations? Thanks in advance.

The idea of this setup at this time is just for work, email zooms, etc… Streaming services are something I would consider in the future. Connection at home server will be 1gbps down/upload (fiber) and something similar at the other location as well.

Thank you for the pointers!

I compared devices and ended up ordering 2 slate AX and will practice with those options and see how it goes, I have a travel coming soon and will test it and see. Thank you!

I have some dedicated hosts that are work-related, so a bit more horsepower than is really required. There is a site called LowEndBox that aggregates specials from various providers. Most of them are relatively small providers, so the experience can vary a lot. One provider I found there has been fantastic over the 5 years I’ve used them, but another I picked up in November has already experienced three pretty significant outages.

I got both Slate, created 1 as a server, got the other one as a client (uploaded the file I got from the server one) and did a connection and it looks like its working, I need to test it from a different location now to check.