Hi everyone. Really silly and basic question, I might be wrong, but I’m sure I have renamed devices before. I am running a Flint router and I’m looking to name all the devices connected. I have a few that seem to have auto named and a few static that Havnt that I would like to name, IE, Nvidia Shield, Formuler Z10 then to name all our individual mobiles and tablets. I have tried through the web UI and also the mobile app and I can’t for the life of me figure it out.

Already have LUCI. found it now thanks to your reply. Thanks you very much.

My devices have had the name change in LUCI but in the normal web gui/ app they still show a * as the name.

I have found sometimes it takes a little bit of time to propagate. Try disconnecting and then reconnecting your devices which works sometimes as well.

Ok thanks, I’ve tried restarting the Flint, I’ll try pulling the plug out and reconnecting.

Another strange one, I have a Netgear switch connected to the Flint yet I can’t find my Shields IP address, Shield is hard wired to the switch, in turn hard wired to the Flint. I want to set the Shield to go via vpn but not other devices like the kids iPads and the PS5 etc, again Shield has a static IP (I try to static IP my items so I can control them but keep smaller things like kids stuff, Alexa etc all just set as DHCP on the 2.4).

I’ve had the router since release but have only been using as a repeater. Only started it as the main router yesterday.

Thanks for your time.

Forget about the shield, as I had it set as a static IP it still had the old hubs gateway (192.168.1.254 and Flint is 1.1) changed and now visible. Was throwing me as still had internet access.

@limbot still not propagated the names, surely that should be long enough?

Yes should have by now when I said a while meant within an hour not days.

In order for hostnames of connected devices to display consistently, the client devices have to be assigned static IP addresses from the router because each hostname is associated to a unique IP address and non-static IP addresses may change over time. You can set up static IP address assignments to their MAC addresses via LuCI → Network → DHCP and DNS → Static Leases. There should not much propagation time because the mappings are all on the router itself and do not get propagated out on the Internet.

For client devices with static IP addresses manually configured on the devices themselves, you still have to add them to the router, or else the router may not know about them. Note that some makes/models of devices automatically send out their factory or user-defined hostname via Option 12 of the DHCP protocol, but the factory hostnames are generic and you may want to set them yourself.

Not sure if I’m misunderstanding.

If I rename via Luci, then should the rename work via the normal login/ app? I seem to have to use a mix of all 3, my strong VPN can only be setup via the app (login not adding manually).

3 of these devices have been renamed via Luci.
Still show as a * in normal web gui.

All these are static IP at device level.

Sorry, never used the app and not sure about your reply. 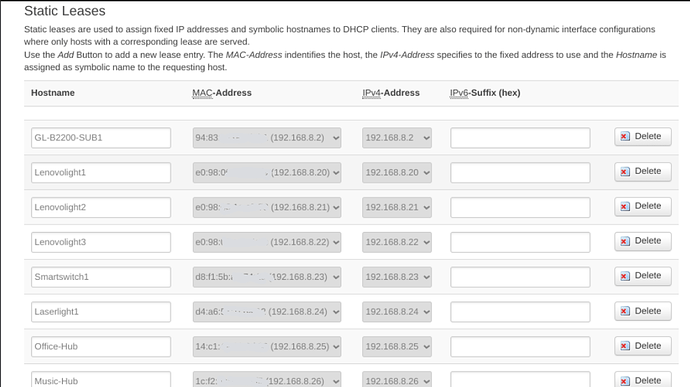 which translates to showing the below under clients. 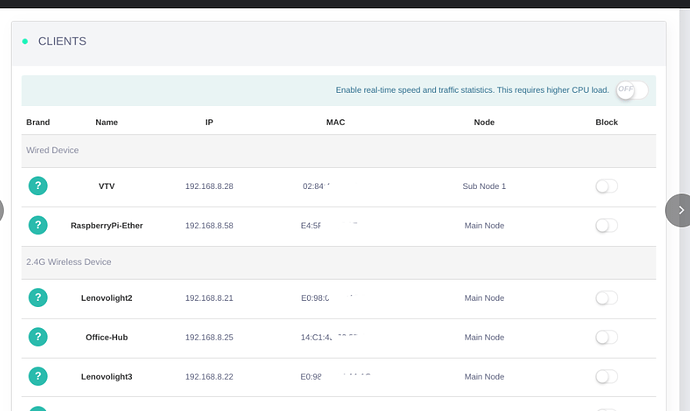 This is mine via Luci

See wcs2228’s post above re static IP at device level and firstly try changing your devices to DHCP then use Static Lease instead of Hostnames to name and static Ip your devices.
(or try one first and see what results)