Overall pretty happy so far. Photo has Magic Mouse 2 in it for size reference. 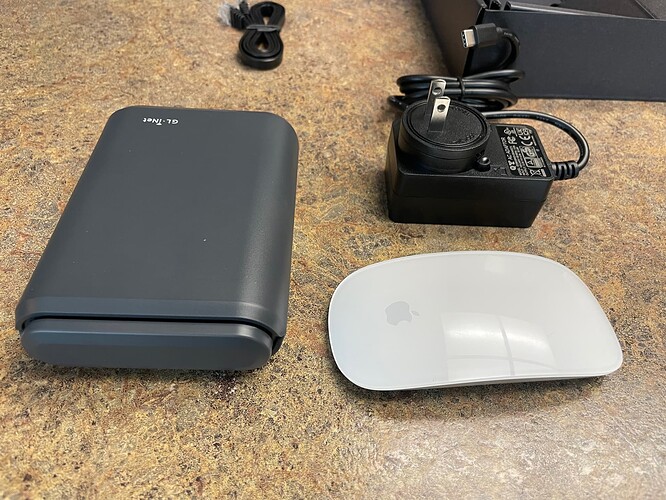 Thank you for the great info. Can you let us know the weight of both the AXT1800 and power supply. Weight is important to those of us who need a travel router.

Here are some more pics 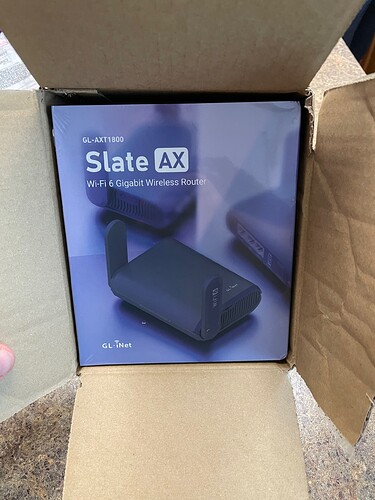 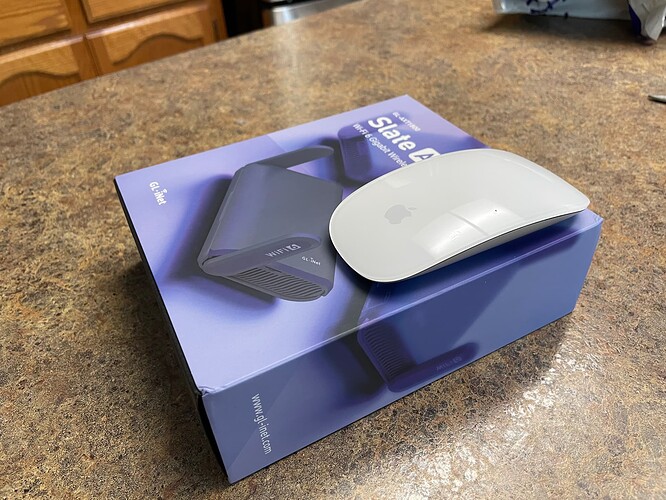 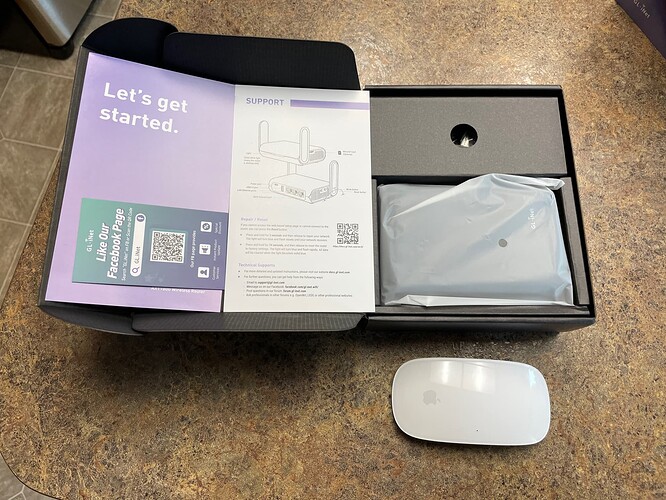 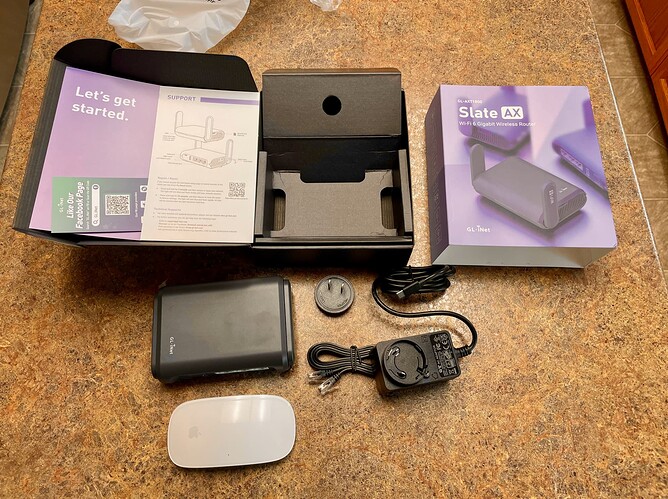 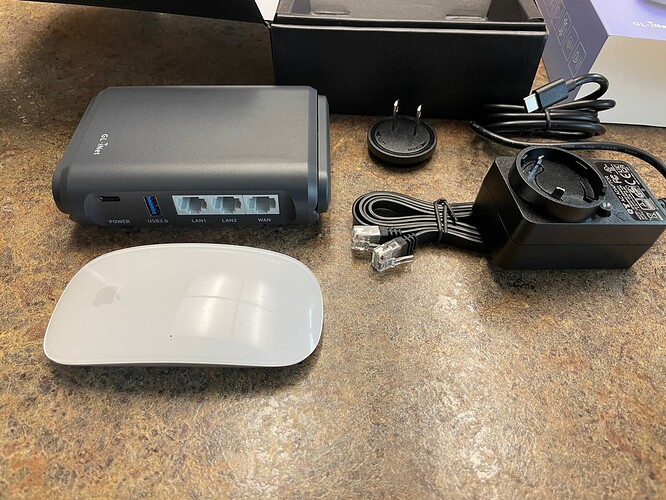 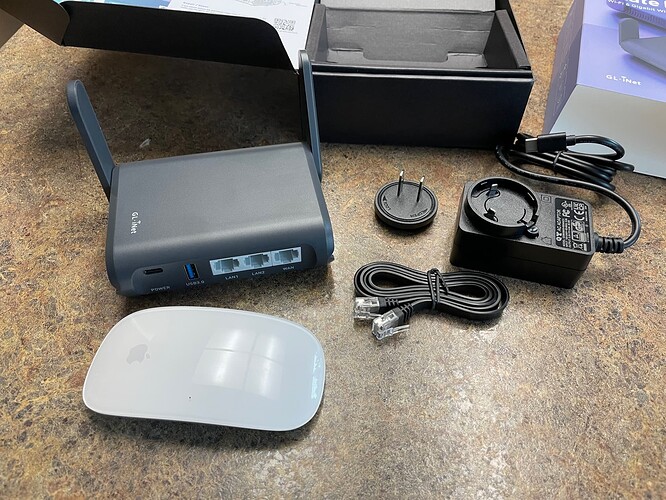 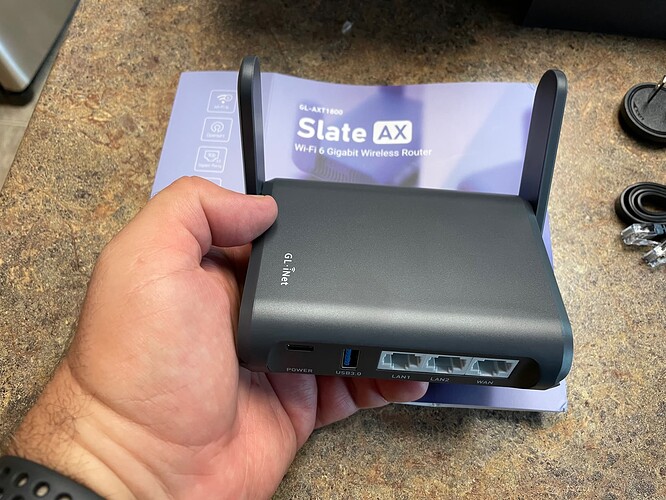 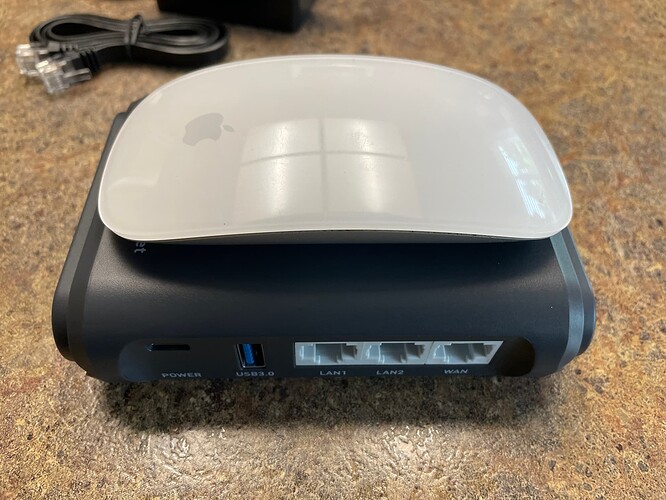 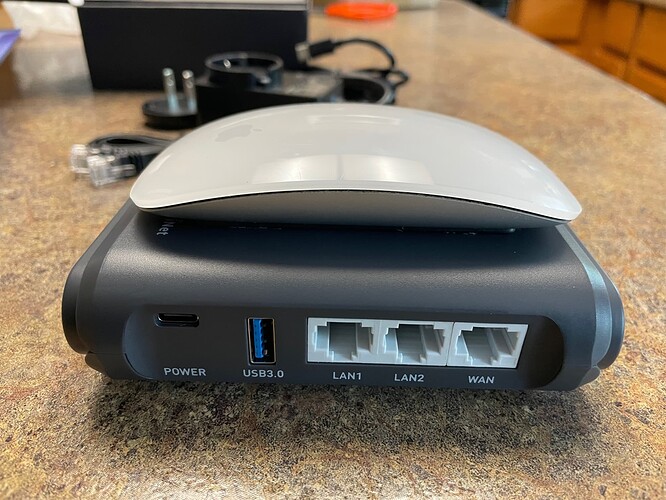 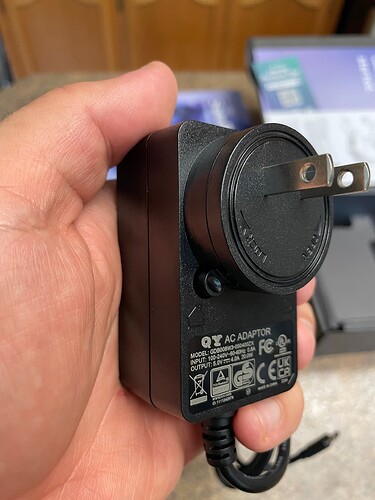 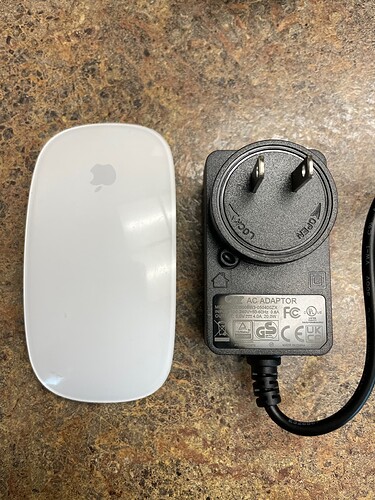 Thank you for the info! It looks like a cool device for the house or lab, but for travel, I would have a hard time justifying going from my original Slate at 86g with a 48g charger, to tripling the weight and having to pack something even bigger. For the work I do the original Slate running Wireguard is plenty fast enough.

Valid points - this is bigger than I had in my mind when I ordered it. Will try it out for a while, but I could see advantages in possibly downgrading to a smaller and lighter solution.

Hello,
Today I received my AXT1800 in addition to previously bought GL-AR750S-Ext / Slate (3 pieces), MT1300 Beryl and AX1800 Flint. I am neither shocked by size of weight, it is close to the size /weight of Beryl and much smaller/lighter than Flint. I am not sure I understand people worrying about 100 grams of extra weight, this is a powerful router (basically Flint in smaller package).

I am really surprised to see that AXT1800 has a small fan located at the bottom (none of the pictures above show it) - so far I have not seen it working, although the router was quite warm at times. It would be nice if the there was a way to control the fan - I would prefer to see it slowly and silently running all the time (the router is warm all the time) instead of kicking in, at some point, at full force.

What I have seen today:
a) the router can easily handle 500 Mbps WAN connection basically providing 400-450 Mbps via LAN and 5 ghz Wi-Fi radio;
b) I ran a 6 hour test, there were 4 different devices (2 WiFi 6) connected to 5 ghz band and the wifi radios (both) stopped working twice during the testing period, I had to reboot the router to be able to connect to AXT1800 WiFi again.
c) AXT1800 is the slightly less powerful router in comparison with AX1800 Flint, probably due to the small number of antennas, tomorrow will try to compare it with Beryl;
d) I am extremely glad to see that AdGuard works well on this devices - to be honest, that is the only reason why I bought this router in addition to the collection I already have, I really want to use DNS filtering on a travel router (to take care about Windows updates, telemetry and other similar stuff)

To sum up all given above:

Awesome review @i7bar - you are certainly more technical than me

Same with cubic space (cm3 or inches cubed). I think the weight of the Slate AX is self is acceptable (although as some have pointed out it’s about 2.5-3x the weight of the original Slate. The charger is really big and heavy vs the compact stuff we see on the market today.

I totally understand this part and fully agree (being a frequent traveler myself). But everything has its price - AXT1800 is a quite powerful router. Could it be lighter? I don’t know but looking at the massive heat sink at the bottom I really appreciate its size and weight because it is there for a reason.
Believe you or not but I have several LTE routers which are normally sit close to the window (at different locations) - during really hot summer days the temperature of the LTE modems in those routers can reach 80 degrees Celsius which in turn leads to overheating. For one of those routers I had to install a small fan on the top to make sure that I can safely use it 24x7 for extended period of time.

The charger is really big and heavy vs the compact stuff we see on the market today.

Again, it depends. If I compare 5v x 4A power adapter from AXT1800 with similar adapters coming with LTE routers, the first one is significantly smaller.

When I care about weight I take with me GL-AR750S-Ext, running OpenWrt 18.06 - it is lighter, fully OpenWrt compatible and can do 90% of all tasks which can be done by AXT1800. There is only one thing which has to taken into account - with 4 or 5 extra packages installed (TravelMate, mc, tcpdump, mwan3 (load balancing), bandwidth monitoring) it uses 95% of all available memory and fully loads the CPU. i.e. it runs at its limit. And since sometimes I need/want to run AdGuard and OpenVPN I, obviously, need a more powerful router even at the expense of 100 extra grams of weight, because it will be justified in my case.
Just my five cents.

On what date did you buy it? Maybe you are a beta tester?

I ordered mine when they launched the pre-order campaign, I think I was in the 2nd price batch. Not a beta tester.

Thank you for the answer. I ordered mine at the lowest price (I have been one of the first)

Have you received an email that it had already been sent to you?

Yes, if you have not received a shipping notice, and you orderedt it at the cheapest price (ie first to order) - then I’d contact GL-iNet.

Did you get a Order Confirmation email when you first ordered it? Mine came one May 23rd, so your’s should be in your email around that date too.

Their customer service email is: cs@gl-inet.com

Any updates on the Beryl compare is on would be greatly appreciated!! As well as any updated on crashing and bugs now that a few days have past

be in your email around that date too.

Thank you for answering!

I have sent you an email, I will wait for your response, thank you for telling me where to send it!

But hopefully they do get it touch with you soon

The small fans shall be started manually by order through SSH in the official operating system. Now
The linux version can be upgraded to version 5.4.169 and you can build the operating system by yourself, the code is openned for all to use.

Any updates on the Beryl compare is on would be greatly appreciated!! As well as any updated on crashing and bugs now that a few days have past

So far, everything works pretty well, I stopped extensively testing it and now the router runs in ‘every day work mode’ meaning there are 2-4 wireless and 1 wired client connected, none of them consumes a lot of bandwidth, just typical usage. I checked the log, the router did not restart for several days. The router runs switches periodically from/to repeater / wired mode, AdGuard uses 10 host files, the screenshot is attached. 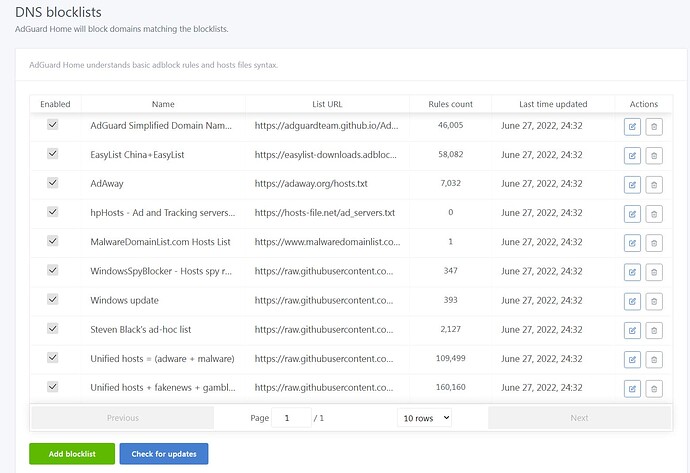 This feature is the one I waited/wanted for the most.

I installed several additional packages such as the frond end for MWAN3 and made some changes in the config (which probably means that I slightly changed the original GL config).
I tried to tether a smartphone, it worked to some extended, meaning it started working fine and stop a bit later. To achieve that I had to modify TTL and hope limit counter for all interfaces.
But there is something that bothers me - when I capture the packets leaving the WAN, I see different TTL and this is very strange (although it has been reported by another user once).
The packets with incorrect TTL coming from MWAN3 which uses ping for check the state of specific interfaces. And the custom setting of TTL for POSTROUTING does not affect the TTL of the packets sent by MWAN3.
This is something I want to look into later, I also use GL-AR750S-Ext / Slate, running OpenWrt 18.06 with MWAN3 (and such) and in that case TTL is set correctly, the tethering works without any glitches.

This is probably all what I can say about AXT1800 right now.

I am not sure how I would compare Beryl with AXT1800. I would say that Beryl has a bit stronger signal than GL-AR750S, more memory, faster WiFi and a bit faster CPU. The best thing about Beryl is that it runs well OpenWrt while AXT1800 cannot (and this is important for me). The best thing about AXT180 that it has even more memory, faster CPU, faster WiFi and it can run AdGuard (and this is important for me). That is why I have both. But for you it is probably better just wait for a little longer before you can decide which router to get.

Plus, it would be useful to know what are your priorities in this regard:
a) run original OpenWrt;
b) run DNS filtering (AdGuard);
c) and so on.

The small fans shall be started manually by order through SSH in the official operating system.

Can you provide any additional information? Started with what command?
thanks.

Some results of speed test. It would be better to use a dedicated iperf server to test the speed but this time I used att speed test and fast.com. The router was connected (WAN) to pfsense , pfsense is connected to fiber / 1Gb line, the client (WIN10) was connected using LAN port of the router. All 3 devices run MWAN3 and some other services: 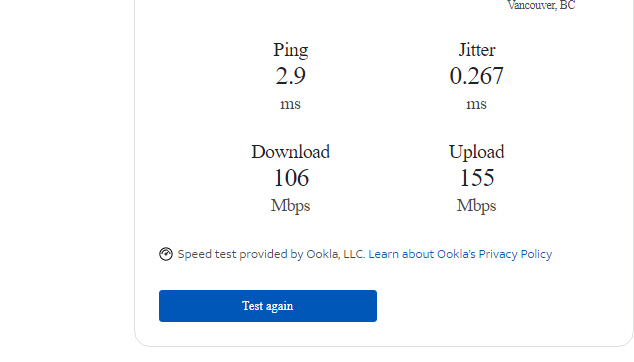 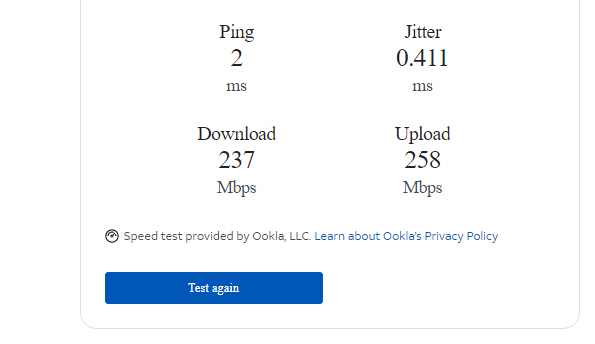 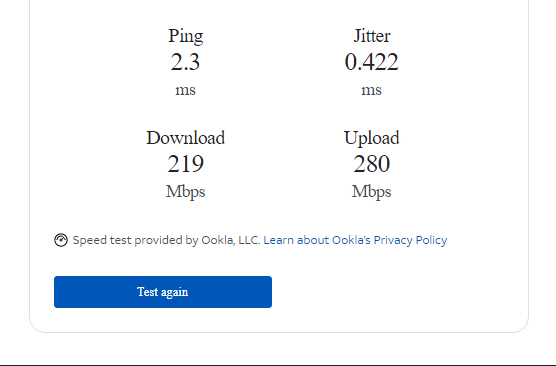 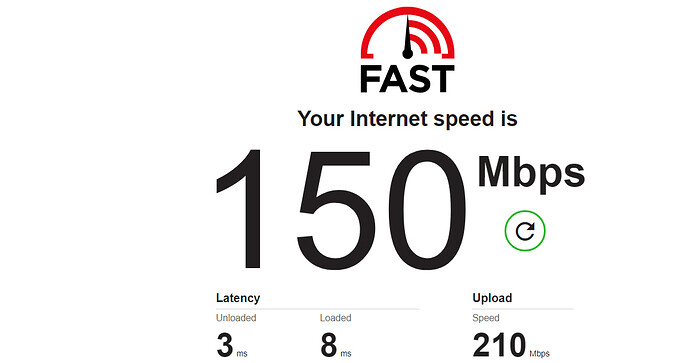 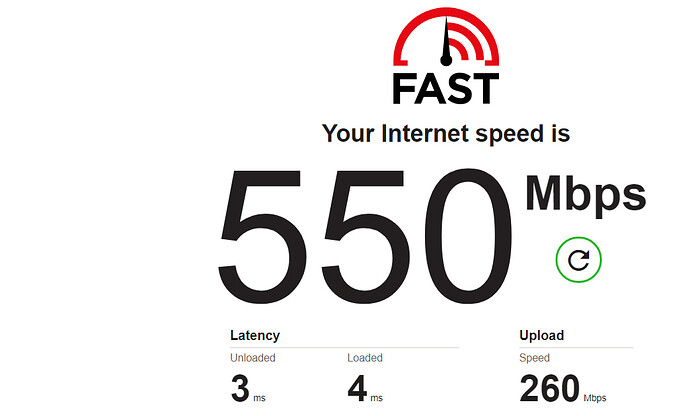 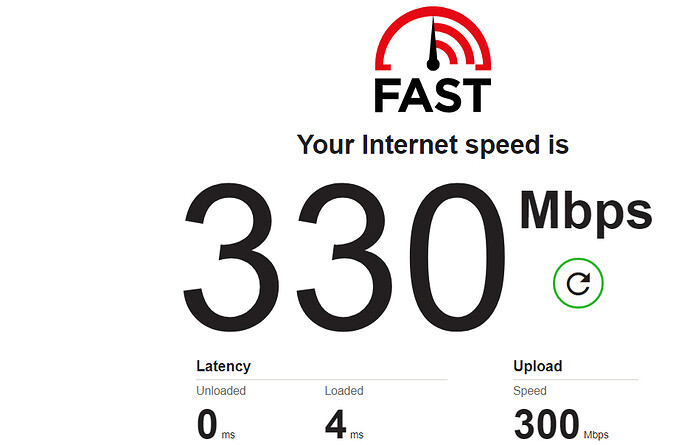 This is off topic, but adblock on the Beryl is not enough for you?