So using WISP repeater to connect to my buildings guest network.

Using my TP-Link WR802n was getting around 10 Mb, using the Mango (3.022) was only getting around 1Mb (it would jump initially to 6-7Mb and then drop down to about 1Mb) via Speedtest. A huge difference!

Tried all sorts of things trying to work out what the difference might be.

Finally figured perhaps the IPV6 was the issue, the only major difference that I could see between the 2 units.

Never had this much difference between the two units before and not sure what’s special about this network but worth keeping in mind for future reference if you get slow WISP repeater speeds.

You disable IPv6, then this problem was solved?

Did not entirely remove IPV6.

Just removed the tick from the checkbox at

And only on the LAN interface, not on any others. 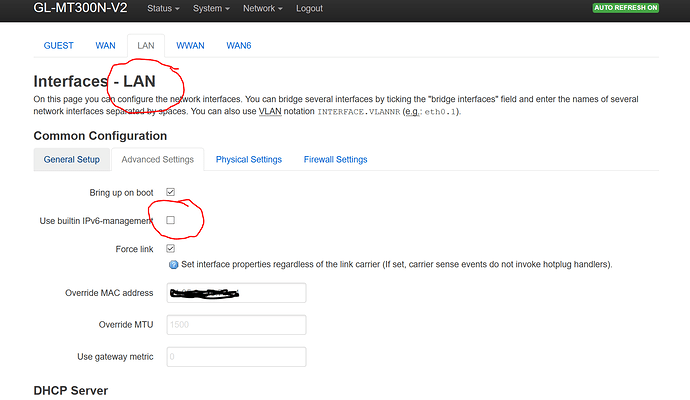 But it doesn’t seem have anything to do with repeater. You just change the LAN interface, so strange.

I am having the same issue on my GL-AR750S running the latest firmware, 3.025. I am getting speeds around 10Mbps while in repeater mode, then when I make the change that @limbot suggested, it immediately jumps up to 100-120Mbps, which is what I would expect to see. Not sure why but it seems like it’s a bug of some kind.

There is a bug where the router goes to 10 mbits mode after an reboot.

I had the exact same problem with firmware 2.271, and still have it now.

I could fixe the problem temporary by changing the wifi speed to 10 and then back to 300.
This is no longer possible on the newest firmware.

It’s really annoying. Router with internet from lan is fast 80-90mbits (I have 100mbits internet), when using it in repeater mode it dropes down to 3-9bits…

2.4GHz in congested area will be shoddy, It has become increasingly un-useful. it travels too far and interferes too much. Hopefully we can all make a quick transition to WiFi 6.

It’s a bug in the firmware, not a problem of 2.4 GHz wifi. There is a total of 6, 2.4GHz wifi networks, where only one is on Channel 5, and that is the mini Router.

And my main wifi router displayed with which speed devices are connected, and the mini router is connected with 10/1.

As I described the problem in my old tread, I could fix it temporary on the old firmware. Where I could change the speed to 300 and there by have a normal speed. Same router, same place, same networks interferences, but whent from 3-9 mbits to 80-90mbits. SAME SETUP except I changed the speed to 10 and then back to 300.

It showes what the device is able to and what it actually uses.

Okay, after switching to channel 11 on my main router, it mini router now get’s about 50mbps down and upload.
That’s way bedder. But sadly I can’t change the channel when I’m in a hotel.
I had the mini router in the drawer ever since I bought it because I con’t use it for me.

Ja let’s hope that they will do something with wifi 6.