From /etc/rc.d/S99gl_tertf, I noticed that it loads a module after boot, named ter-traffic which had D (Uninterruptible sleep, usually IO) process state in the top output. I searched through GL-inet repository but couldn’t gather much info except the .ipk file. I unloaded the module and the system load decreased. 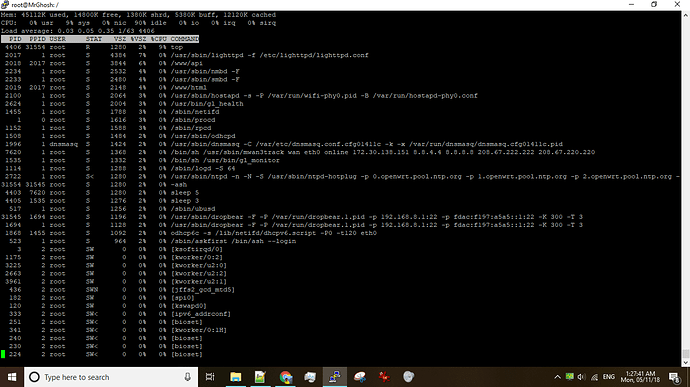 I’m reluctant to chime in bc of the harsh comments in other thread but I have also noticed higher load averages in recent test builds.

I’m reluctant to chime in bc of the harsh comments in other thread but I have also noticed higher load averages in recent test builds.

Thank you @manderss99 for confirming the load issue. Lets see what the developers say about the module. I have no idea about the impact it will have after removing.

And about the harsh comments, this forum was not like this always. Last time I posted months ago, it was more acceptable towards new users. “talking in 3rd person”, “calling other people inexperienced” doesn’t build a healthy community. Everybody has to start somewhere.

It is a traffic statistics module for each client.

So, a solution is to disable this by default and then enable if needed.

The problem with some new and/experienced users is that they want spoon-feeding without bothering to try and search the forum for answers first!
Otherwise almost everyone is extremely helpful and polite.

load average has no relationship with CPU utilization. The process is stuck in ‘uninterruptible sleep’ state. ie., it is in the middle of a system call which lasts forever, as far as I have understood. I am no kernel developer and I don’t have much knowledge about this but I have seen other firmwares reporting traffic statistics and they don’t cause 1.0 load.

I think, GL-inet should load the module only if users enable traffic statistics from the admin panel as Alzhao suggested. Thus it will work for everybody.

You should really do more homework.