I don’t see anything obvious in here that covers what I’m getting…
I downloaded the firmware file as instructed: openwrt-ar750s-3.212-0407.img

I watched the video.
I changed the address to 192.168.1.2
I held the button, plugged in the power, it blinked 5 times, I let go of the button.
I put 192.168.1.1 in the address and the “Firmware Update” screen appeared.
I CHOSE the file I downloaded.
I clicked Update Gl-Inet Firmware.

I sat back and waited, and got UPDATE FAILED.

At THIS POINT, I have NO IDEA what to do.
The “One thread to rule them all” is useless since it just says * In U-Boot, flash the 3.104 firmware (.img file)

I’ve got the firmware file for 3.212 sitting here and it fails
I downloaded the IMG file for 3.211 and tried that AND IT FAILS…

Can somebody PLEASE me how to get this #$%^&* Slate to load the firmware?

Is it a black router with antenna on the sides?

It’s a Slate - dark gray with antennas on the side. 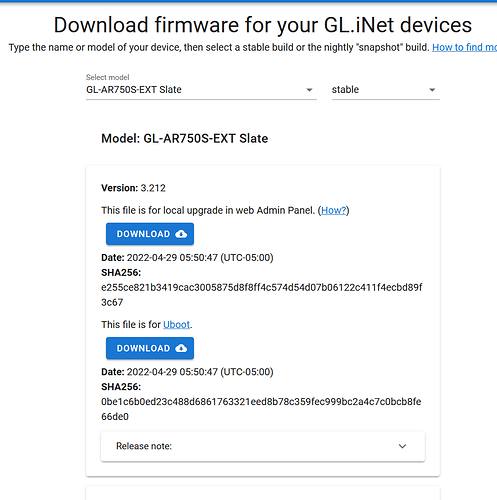 Which one should I be downloading? Should I NOT be getting the for Uboot?

Maybe your uboot is old. Have you tried upgrade uboot itself. In uboot failsafe, access 192.168.1.1/uboot.html and flash this one https://github.com/gl-inet/uboot-for-qca95xx/tree/master/bin Then uboot failsafe mode should work for latest firmware

Should be what you need. Flash this in u-boot then flash the most recent stable firmware from u-boot

Anyhow it’s updating at the moment. BUT, if the instructions work, I’ll try updating uboot…

I may have spoken too soon. Though it SAYS “UPDATE IN PROGRESS” it’s now somewhere around 30 minutes and it’s still not DONE… And the ONLY light that’s on on the Slate is power.

Yes, failsafe is the usual u-boot

I’ve been under the presumption that when the Slate updates Uboot, it’ll tell the browser it’s done. As in SAY “uboot update complete” or something similar.

DOES it do this?

'Cause after an hour or so of having the browser sit and the waiting circle circling, and only the power light on on the Slate - except every once in a great while the second light comes on, then the third, then they go off and it sits, I have NOTHING to tell me whether the uboot update failed or worked.

At the moment, it’s supposed to be updating uboot again, so far with the same results as last time.

Went into uboot again. Gave it the uboot file the link was for, it started updating.

Though the Slate never showed any indication it was done, after a half hour or so I unplugged it, rebooted it into firmware again, and THIS time it took 3.212 and it SAYS it’s updating. I presume this means the uboot update must have worked. When I go to the Firmware update screen it now says uboot 2.0 version 20 12 22.

It got to the “UPDATE IN PROGRESS” screen, 2nd led blinked, then both 2nd and 3rd, and back and forth - this went on for 30-60 seconds with different leds blinking, then nothing.

I’m not sure WHAT should indicate it successfully did anything.

Eventually I unplugged the Slate and plugged back in normally. After 20 minutes, it’s still sitting there with the power light on and nothing else. No blinking, no booting, nothing.

If you have successfully loaded the firmware by default the subnet will be 192. 168.8.x once the firmware has been updated and the router has rebooted.

There is no “successful” screen from the uboot…

Well, through no great skill on my part, it APPEARS to be working.

I ran the 3.212 firmware again, let it sit - same as I did before - then unplugged it and moved it to where it normally sits, plugged it into the cell phone, connected to the power supply, and it booted.

I have NO idea why it would be any different THIS time than LAST time, but I was able to go in, set the passwords, rename the networks and set passwords, and it APPEARS to work

It’s STILL not very robust - if I move it or plug or unplug things it often crashes. In reality, NEITHER the slate or the creta - the OTHER router - is much for reliable. They both, on different cell phones, crash, lose connections, drop the network, and generally mostly work most of the time.

The Slate WAS normally the more reliable of the two, but over the last month or so it’s gotten extremely fragile - often just a touch or bump will crash it.

BUT, it appears to boot, it’s configured, and I can see data.

Thanks a lot for all the help. I’ll see how it goes later in the week when these two routers have to actually work for all the data connections while in a campground near a small town.

You have to start by installing 3.104 because bugs in the existing U-Boot in some Slate models prevent flashing anything newer.

Finally update from 3.105 (via GL-inet GUI) to your desired firmware.

Actually, I ended up having to update U-Boot to a new version that would accept firmware in a file larger than 16MB.