Just saw some of the advertising. No SDXC card listed but shown in picture(possible SIM) Nothing on VPN Speeds. Hope we get OpenWRT 19.07. Also looks like it is mounted upside-down ( I guess for a airflow) Not sure if it gets a separate network processor

GL-AXT1800 has the same IPQ6000 1.2GHz processor as the GL-AX1800, so probably the same VPN speeds. Firmware may be upgraded to be same on both models with same SOC.

The slot looks like the standard GL.iNet microSD card slot because SIM cards should be in a tray. Product is classified as Travel Router, not 4G LTE Router Gateway.

The question is what is the price?

So, same specs, but Flint doesn’t have a microSD card slot, right?

So less plastic used for the new GL-AXT1800, less antennas but microSD slot. I think it will be for the same price if I dare to guess.

I have not experienced any hotel or public hotspot that provides sustained Internet speeds anywhere close to the limit of 802.11ac, so I don’t see personal benefit to 802.11ax for travel for some time to come.

where did you see the ad? 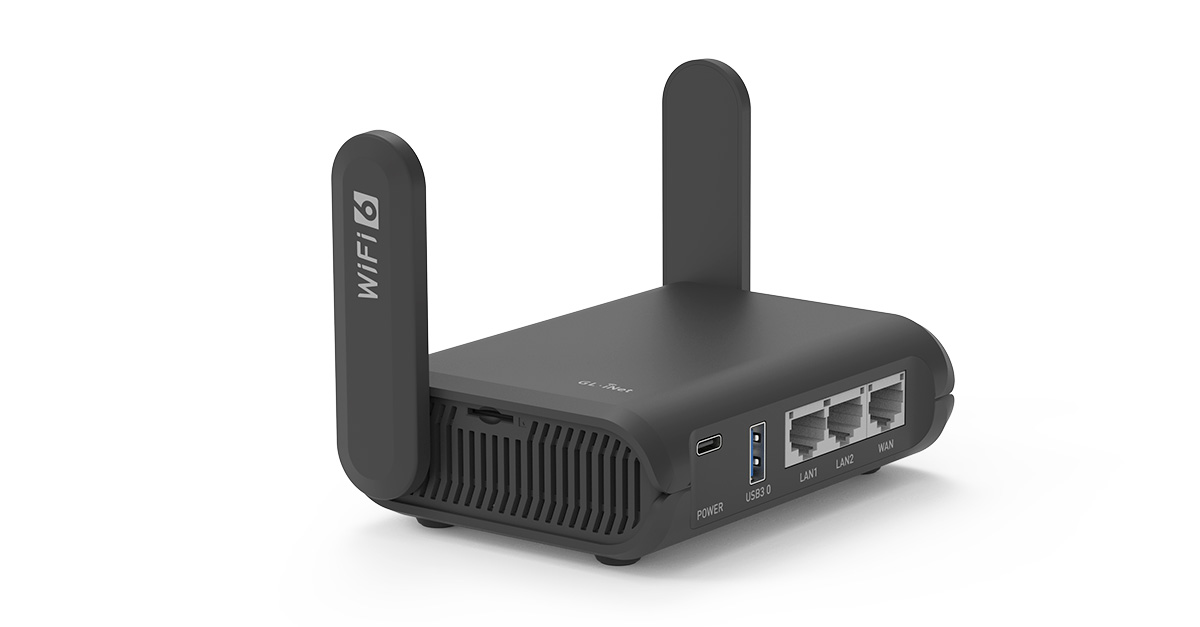 What??? No high gain antennae! I am out…

Hi,
does it have proper usb-c PD for the 12V?
Because there are devices in the market using usb-c port and dumb 12V usb-c chargers without the PD negotiation protocol. So they do not work with any generic usb-c charger/power bank and the included charger is a risk for other devices not supporting 12V.
Thanks.

It can use 5V 3A, as router will use <10W and usb/micro sd <5W. I was supposing it works like the Flint, but perhaps I am wrong. Home routers usually choose 12V to provide >=5W to power hungry usb devices while maintaining current <3A (5V*3A=15W while 12V*3A=36W). A 15W can power a usb drive, but probably not an old 2.5 mechanical drive or a power intensive ssd.

When GL-iNet moved to USB-C with the Beryl, they gave it 5v 3A, no PD because no need to charge a battery. My working assumption is that since this is a travel router, they will go the same route. It isn’t that it can use 5V 3A, but that it will only use 5V 3A. Just a guess.

Exactly what I was hoping for!

Any info on an estimated release date/timeframe and will it be available globally right away?

Probably it is simpler for us to use 5V 3A. Better for most of the users as we can use also USB-A to USB-C cables and standard USB-A chargers. But not sure why they choose barrel jack for the Flint if so easy to power all with 5V.

Great router! Hopefully the antennas will be good

Just got a reply from support. Travel Flint still needs some time. They’re hoping for a release in May.