I have both models. The aluminium is definitely hotter than the plastic one especially when running VPN extensively. The plastic one has vents / openings on the side whereas the aluminium one is completely sealed (possibly better for dusty industrial environments).

That is a problem of human feel I think. With metal case, the heat is much easier to reach the surface so you feel it is hot. But the CPU tempeature may be lower.

I agree and it’s a good thing that the heat dissipates within the metal case. I’ve put them all on fans to even maximise the heat dissipation.
As a matter of interest does the mediated unit or the board support temp sensors ? and would work with openwrt package like “Collectd-mod-sensors” ?

Thanks. I guess it’s hard to know then which has lower temperature inside. The aluminium maybe passes more heat from inside to outside, but the plastic has vents.

alzhao, I assume that both are designed to run 24/7 even if they get quite hot? The specs say operating temperature is up to 40C (I think it’s similar for all GL-iNet routers). Shouldn’t be a problem at 30-35C, right?

They are not so hot actually. I use them on 24x7 basis and so far I have not faced a single glitch.

I assume that both are designed to run 24/7 even if they get quite hot? The specs say operating temperature is up to 40C (I think it’s similar for all GL-iNet routers). Shouldn’t be a problem at 30-35C, right?

Not a problem. The dashboard in the UI actually displays the temperature.

No the UI does not display it. I went into SYSTEM / overview and there is no temperature displayed 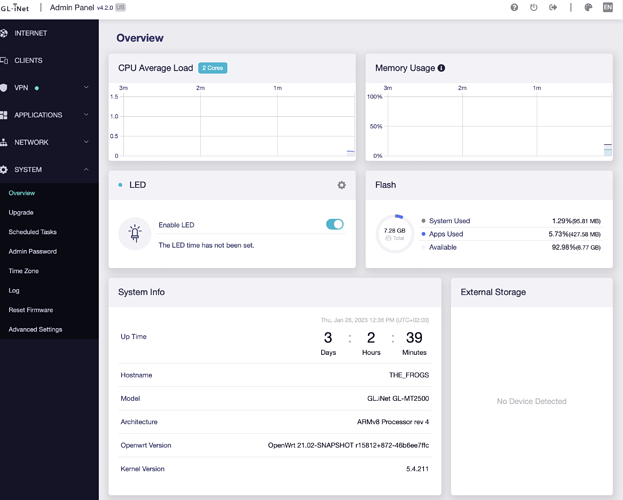 I see. Only AXT1800 has temperature then.

AX1800 used to show temperature but it got lost somewhere…

Hi, I use an Alfa AWUS036ACS dongle with Brume 1 and it works well. GL.inet officially supported this dongle (and the faster Alfa AWUS036AC) in 3.x firmware on Brume 1.

No idea if these dongles will be supported on Brume 2. I would really like it if they are, but @alzhao has said more than once that supporting them (and making sure they worked well) was a giant pain for the dev team. Generally once drivers exist in OpenWRT for a dongle, they will stay working for many future versions of OpenWRT. It would surprise me if it doesn’t work to be honest.

Why anyone would buy the Brume 2 remains beyond me. The Brume 1 was more powerful than its counterparts at the time but I really cannot see the appeal of the Brume 2 with all the other alternatives available that support wireless. Price differentiation is also a failure as metal one is offered at the same price as the Slate AX which does not make any sense.

I set up my Brume 1 as a “server” connected directly my LAN over Ethernet, with no WAN nor wireless connection. It has been running AdGuardHome as a secondary DNS server and previously as a VPN client appliance.

When I eventually get the time, I intend to replace it with my Brume 2, which should run AdGuardHome faster because the Brume 1 has much slower DNS processing response times than my primary DNS server (AdGuardHome in Docker on a Synology NAS). It should also be faster if I want to run it as a VPN client appliance.

The Alfa AWUS036ACS has the same Realtek RTL8811AU chipset as my TP-Link T2U Plus V1 USB wifi adapter. The TP-Link worked on my Brume 1 and I installed the same driver package that is available on my Brume 2. Although it appeared to be detected properly (shown by lsusb), it did not show up automatically as a wireless device in LuCI. There may be additional configuration needed to add the device, which I do not know.

The wireless page does appear in LuCI, but does not show the TP-Link wifi adapter. However, it does show the 2 wifi devices (2.4GHz, 5GHz) that are built into the main MediaTek chipset that are not actually connected in Brume 2.

Mine does not and I swear I asked why and they said the page was removed. I could be wrong. I will try again tomorrow with a newer build.

I also have the nano t2 and would love to use it.

To be more precise, the page is not moved. The config file is removed.

So if you have a wifi dongle and have the necessary driver, you can create /etc/config/wireless and the page will appear.