Which Router to Use?

What GL-iNet router should I use?

Here’s what I need:

I used to use an AR-750S Slate, but I found it didn’t have enough horsepower to streaming-over-vpn in repeater mode. Otherwise, it worked fine.

I replaced it with a AXT-1800 Slate. It works great and is very powerful, but it’s simply too big and too heavy.

What’s a good compromise? The Opal? Beryl? Slate-Plus? I’m really not doing anything fancy, just simply a travel router, but I need more horsepower than the 750S Slate.

Just BTW, is there any comparison page on the GL-iNet website to do an easy comparison between different units?

Though this doesn’t list VPN speed, it’ll tell you the Opal, Beryl and Slate Plus are all the same size. 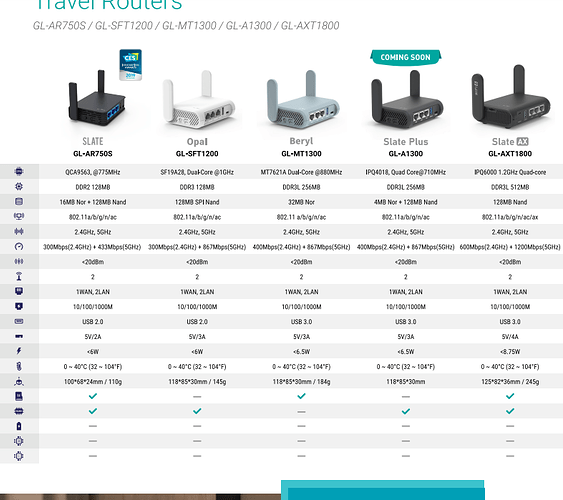 The Opal/Beryl/Slate Plus are just a shade smaller than the AXT. You can see the Beryl and Opal are not much of an improvement in OpenVPN, and even the Slate Plus isn’t that much because OpenVPN is single threaded. WG, which is multithreaded, takes advantage of not only the higher clock speed but the multiple cores of the Slate Plus.

You might experiment with WG if you haven’t, and splitting the radios so that the WISP connection is on one band and the LAN on another, to see if your throughput increases. Also, a wired connection helps a ton.

I too use an AR750S as my primary travel router, and I’m also looking for something to replace it that is smaller, faster, lighter. I don’t need a battery, cell modem, or anything else that draws power or adds size or weight. Just a simple router with dual band WiFi, 2 or 3 Ethernet ports, that can run generic OpenWrt, and most importantly: Just Works!

I feel that GL-iNet has abandoned this market segment. GL iNet was originally known for producing small, low power, affordable routers that could run generic OpenWrt firmware, but those days seem gone. I feel the USB150 was their last small product that was truly a new and innovative design. Even their product naming is no longer innovative, as their new products just re-use old product names: Slate Plus, Slate AX, Brume 2

With the exception of the Brume 2, which is not really a travel router, all new GL iNet routers are bigger, heavier, use more power, and cost more than their predecessors. I understand inflation and a bit about technology, but my new 13” notebook computer I purchased late last year was cheaper, smaller, and faster than the notebook computer that it replaced. My new cell-phone is a little smaller and cost about the same as its predecessor, but has more cores, more RAM, more bands, and more storage.

The Opal, Beryl, Slate Plus and Slate AX are faster then the AR750S, but are bigger, heavier and use more power, and not all these products can run generic OpenWrt. I hope GL iNet in the future refocuses on innovation in the small router market, or someone else moves in.

I agree 10,000% but do add Wireguard in addition to OpenVPN.

SlatePlus or Beryl, specially if you switch over to WG only.

I feel that GL-iNet has abandoned this market segment. GL iNet was originally known for producing small, low power, affordable routers that could run generic OpenWrt firmware, but those days seem gone. I feel the USB150 was their last small product that was truly a new and innovative design. Even their product naming is no longer innovative, as their new products just re-use old product names: Slate Plus, Slate AX, Brume 2

I disagree with this. I think actually they own this market segment, and I think the product differentiation is interesting. Mango and Shadow for really small, low power (in both senses) single band devices; Opal for cheap AC dual band, using a limited chipset; Beryl for a more capable but more expensive version; Slate Plus for a stepped up wireguard; and Slate AX as just a beast for those who care for it. Prices are up, but the Opal is still a lot cheaper than what I bought the Beryl for and the Mango is only $10 more than the $17 I paid for it several years ago.

Can you run https://speedtest.net to see what download speed you are able to get through OpenVPN on your GL-AR750S?

Everyone has their own idea of what travel means, but for me it means being out of my home country for 6 to 12 months at a time, with only a single suitcase and a small carry-on backpack. Size, weight, and power are all important in all my gear. I am looking for a router like the AR750S that is smaller, faster, and lighter.

During various tests in the lab I have achieved up to 12 Mbps using OpenVPN with Shadow in wired mode, and typically 2 or 3 clients can view live video simultaneously without any problems when the stream type is HLS, which is the most common. (Of course Wireguard will improve performance too.) I still intend to test Repeater mode later, but did not have time with other work taking precedence. So I wonder how much of your performance issues in Repeater mode can be attributed to hardware or software, and would like to see your CPU load chart & process list, comparing Repeater mode to Ethernet mode with the same video source.

I also wonder how performance would differ if the clients were connected to the router through a Bluetooth interface instead of WiFi. You may want to install the ‘htop’ terminal application for a more accurate performance test, since you can use it over an SSH connection and will not be tasking the router’s internal web server during the test.

I guess I take issue with the “just a shade smaller”.

Not only is it bigger, it is quite a bit heavier. And for folks that travel -a lot- size (and weight) does matter.

If the hotel is limiting your speed to 4-6 Mbps it should still be fast enough for at least one live video stream, and a properly-configured HLS server can scale resolution automatically to compensate for throughput issues if needed, so it is theoretically possible to view at least two simultaneous streams if you are really getting consistent 6 Mbps throughput. If you are paying for a VPN subscription to use with this device and CPU load is really the problem, you should definitely use a service which supports Wireguard:

VPN encryption on your router, protecting all vulnerable devices connected to your network.

If Shadow can support 3 simultaneous video streams in wired mode (through an ethernet switch) using OpenVPN, then I think it might have enough CPU power to do what you want (at least if you are using Wireguard) …and if that assumption turns out to be false, then using a Bluetooth connection between router & clients might further reduce CPU load when using Repeater mode. Another thing that will affect video streaming performance is “bufferbloat”, so I recommend that you try the DSLreports speed test and choose the “hotel” option. If your bufferbloat rating is poor, then it is possible that you could make some adjustment in the router which would improve the stability of data throughput and eliminate video skipping. There are a couple of routers which can make this adjustment automatically, but they are not small & portable.

I was moved to go down to the local library with my Mango and Beryl for some side by side WISP mode comparisons. The library has a 250/250 fiber connection, and I was connecting to my 200/35 home router. That router should support around 100/100 openvpn and 200/200 wireguard, so it shouldn’t be a factor (but I think it is and something to explore). So the download speed for the Mango and Beryl has a hard limit of 35, while the upload speed limit doesn’t really figure. Using AES encryption; I think the Mango chip has this in hardware but the Beryl does not.

I first tried with my Yoga laptop, which has a 6 core/12 thread processor. My non-VPN speeds, using speedtest.net, were 255/250. My OpenVPN connection to my home router was 30/27, and my Wireguard connection was 27/31. The download speeds for both are maxing out my home connection, but I was surprised the upload speed wasn’t faster.

Trying the Beryl (on the 5G band), my openVPN speed was 15/16, and my wireguard speed was 24/26. Higher clock speed clearly in evidence I didn’t try connecting to the Beryl on one band, with the Beryl connecting on the other.

These aren’t as rosy as the wired speeds in the specs, and there are some surprising things there to explore further with htop on the routers on both sides, but better than I expected.

If you control your OpenVPN server and the OpenVPN client and your GL-iNet device supports it, you could attempt “cipher CHACHA20-POLY1305” on both sides given you use TCP and possibly see OpenVPN speeds increase a bit. Using CHACHA vs AES will help lower power devices as CHACHA is slightly less heavy.

It’s the same cipher wireguard uses, so if that’s fine for wireguard, why wouldn’t it be for OpenVPN.

It still will not give you wireguard’s speeds, but I did see significant increases in speed that way.

If the wifi download speed in the hotel is only 4-6 Mbps, then that is the bottleneck and a more powerful OpenVPN router will not increase it.

There is a procedure to generate WireGuard config files for NordVPN that I used to create my own config files. Another user developed a Linux script somewhere in this forum. I used one of the configs that shows over 30Mpbs download.

Personally, I am fine watching video in 720p, which only requires 2 Mbps speed, even to watch on a 4K TV at home from 10-12 feet away. When I travel, I try to download videos in advance onto USB stick/SD card/HDD (e.g., Netflix, Amazon Prime Video) and watch them offline (e.g., on flights, smaller hotel TV’s).

As more streaming services switch from H.264 to H.265 video encoding, only 2.5 Mbps will be required for 1080p with same or better video quality.