Will there be any workaround for the devices to work? since the 3G shutdown all the devices cannot be activated on their LTE Network.

To provide a great customer experience, Cricket will end 3G wireless networks by February 2022. Learn what that means for you.

Is there a way to change the devices IMEI? All ears on this situation thanks

Did you try to change the imei?

Changing the IMEI might work, but your service could get disconnected if it is discovered your device doesn’t match the IMEI you modified it to.

If one is willing to be like the many people who get their service randomly killed, and scramble to get service back, go for it.

That’s why gl-inet invested the time and money to get their devices “AT&T Certified.”

For what it’s worth - I think the IMEI compatibility list for data only devices that Cricket and AT&T are using is absolute rubbish.

The x750v2 is ABSOLUTELY an LTE device.

See my other post about the IMEI’s from GL-Inet not being correct (their check digit is calculated incorrectly, apparently?).

Changing the IMEI for your “GL Technologies (Hong Kong) Limited 4G LTE Wireless Gateway” from one IMEI for that to another for that isn’t an issue AFAIK.

It’s when you go grab an iPad IMEI or something and use that.

But then this takes us to the crux of the problem -

Cricket and AT&T are saying the IMEI for a “GL Technologies (Hong Kong) Limited 4G LTE Wireless Gateway” is, and I stress this… NOT COMPATIBLE with their network.

Which means, if you bought one and currently have service, your service is … and I stress this, too… GOING TO GO AWAY. The IMEI for the device will eventually be denied service, just like how they’re denying signing up with that IMEI.

Resolving this lies with GL-Inet. They have to get their IMEI’s on the compatibility list for post 3G shutdown.

Secondly, they have to make sure the devices with IMEIs going to the ATT/Cricket network have VALID IMEIs. Unlike Tmobile, ATT/Cricket won’t accept invalid IMEIs.

Until those two things happen, you won’t be able to buy a X750V2, a Cricket Sim Card, go to the website and enter the IMEI and activate the SIM for that device and get service.

You have to try and game the network and change your IMEI.

In regards to this - you have to use an IMEI that they’ll accept, and I think it’s foolish to think they’re not going to be looking for bogus IMEIs on their network. There’s a reason compatible IMEIs are VERY rare, now. It currently looks like the Snapdragon X16 (or higher) are one of the few non-phone devices they’ll accept.

I wouldn’t doubt these are listed as compatible because they have a way to determine the device the modem is in.

Besides the revenue that’ll be driven by this for ATT/Cricket, I think this is a direct effort to put a stake through the heart of “just change your IMEI and YOLO” industry we’ve enjoyed for a while.

In less than 12 months, devices like MOFIs are going to be absolutely useless if ATT is the only LTE signal where you live.

@alzhao Maybe they have your IMEIs on some 3G list, so their IMEI compatibility check is automatically denying new service for devices on that list? Since you got your certification done, perhaps you guys can have them flat out remove your devices from 3G compatibility? I don’t know what impact that’d be for existing customers. Good luck.

1* I visited https://www.fakepersongenerator.com/imei-generator to generate a Compatible iPhone IMEI I decided on a iPhone 11 IMEI 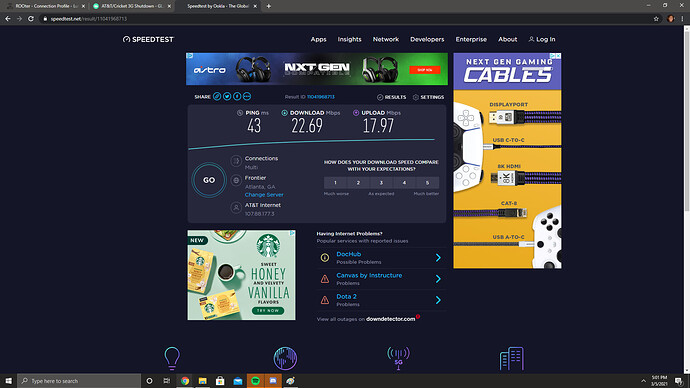 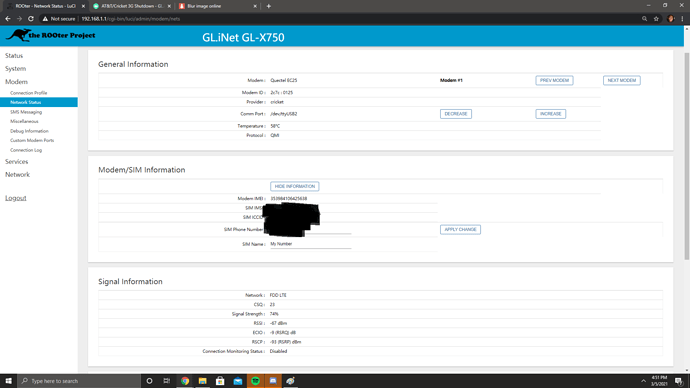 We are testing AT&T and we can connect without any problem, whatever the IMEI is.

With Cricket we haven’t yet to connect. They always send a 3G shutdown message. We will ask them.

Changing your wireless provider but don't want to buy a new phone? Bring your unlocked phone to Cricket! Visit our website to see if your phone is compatible.

This does not relate to IMEI. They take whatever IMEI.

Furthermore, if you have more issues, pls try the 2 AT commands below to get the SIM card info an apn settings. Then search the carrier’s website to verify if the apn is correct or not. If not, find the correct apn and set up.

Try uboot failsafe. Sometime you need to try multiple times to get it back. No idea why.