Hello!!
I have a GL-AXT1800, I’m configuring it, and now I have some doubts, I explain myself.
My minipc has 2 lan ports, I have installed proxmox and I run a vm with sophos as a firewall. Now, as I´m at work, the minipc is connected to our LAN, however next week (or so) it will be connected to my ISP´s router at home. 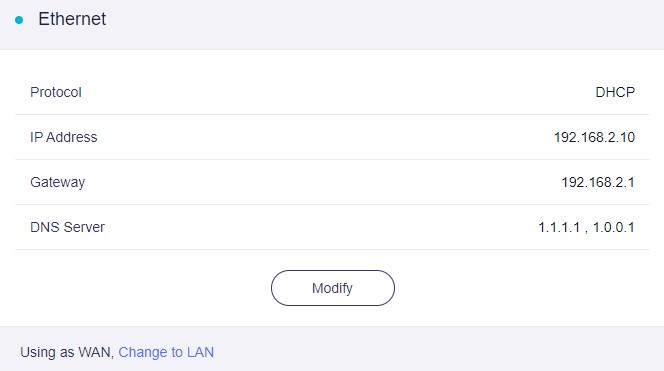 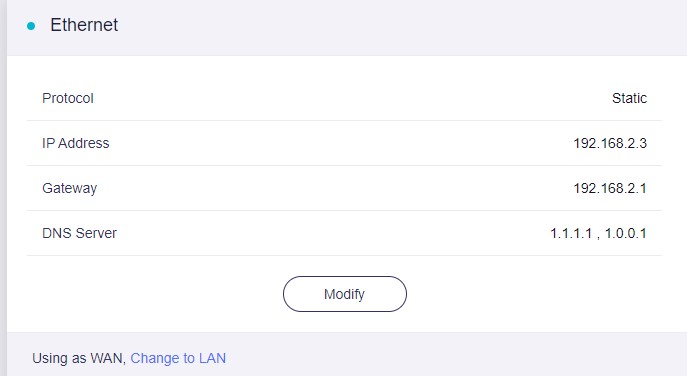 If I set the WAN port as LAN, I can access to Internet, but I have a banner in the web interface advertising me that the gl-axt1800 hasn’t access to internet, and can’t do things like manage plugins, or update the system. 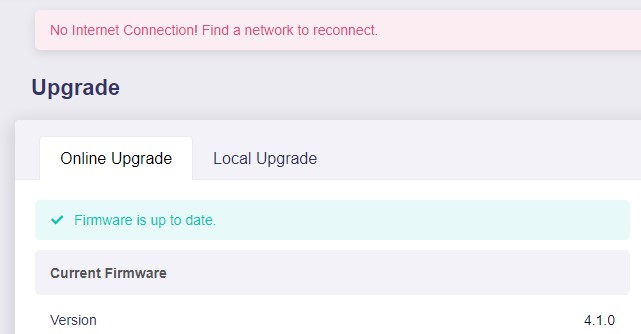 I have the DHCP server disabled via Luci because the DHCP is served by the Sophos, and I use the gl-axt1800 as router (In the Network Mode section).

I’m a little confused, I’m not sure how to manage it…

In simple terms, you want to connect an AXT1800 behind the main router and the devices that access the AXT1800 use the IP assigned by the DHCP of the main router, right?

What is the purpose of using the AXT1800? Is it just to provide Wi-Fi? It sounds like Access Point mode would be more appropriate for this case. Network Mode - GL.iNet Docs (gl-inet.com)

In simple terms, you want to connect an AXT1800 behind the main router and the devices that access the AXT1800 use the IP assigned by the DHCP of the main router, right?

Sort of… When I will move these devices (minipc and axt1800) to my home, the DHCP will be offered by the Sophos firewall.

I have already tested the AP mode, there was a considerable delay in the connection to the internet, since I clicked to enter a web until I could navigate it took eons…

PD: Apologizes for my English, it´s not my language…

I’m not an expert, but I think you need to plug your Router (AXT1800) into the LAN port from PC 2nd LAN port as you have it now, and set Router a static IP.

DHCP Settings Tab
Ignore DHCP. Your PC will now asign IPs to your devices in your network even if devices are connected to Router.

I think you can now access config router page at 192.168.8.2 from your network and have Updates and Internet connection as well in router and devices connected to it,

I hope is what you ask for, my english is very bad.

I previously set up GL-MV1000W and GL-A1300 as a “LAN-only” access point, similar to the method described above by @David.

The GL.iNet router will then be connected on your main LAN only, on the same subnet, accessible by wifi or Ethernet. The LED on the router may keep flashing that there is no Internet on the WAN and, if this is bothersome, you can cover it with black tape. Alternatively, turn off the LED by DIsabling/Stopping gl_led from running in LuCI and editing /etc/config/gl_led to set led_enable and led_daemon to ‘0’.

Log into the LuCI UI and go to System → Startup to Disable and Stop mwan3 from running.

Hello! May be it’s not a correct config but I have two routers (2 AR750) connected by LAN at my main AR750S with my above config, with consecutive IPs and I have mwan3 working with no problems in all of them. I use it just to check with green or red pictures in Overview page in Luci as a monitor 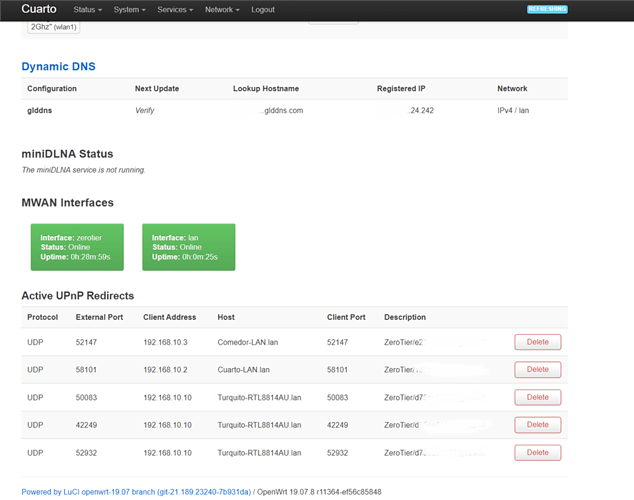 There are some differences between our 2 methods.

In my procedure, the GL.iNet router acts as a “wireless LAN switch”. Since there is no WAN connection at all, no changes are required on the Firewall because there would not be any traffic going through it (all Internet traffic still goes through the main LAN router as the default gateway). Similarly, mwan3 is not required with no WAN traffic and it just writes a lot of repeated messages in the System Log and may display “No Internet Connection” in the GL.iNet Admin Panel.

I think the WAN port can be changed to a LAN port in Admin Panel, in order to gain an extra Ethernet LAN port, but I have not tested this.

Sorry, I deleted the first photo that I put in the wrong way and it was from my first router (AR750S ) that does have the WAN working and it has created confusion.